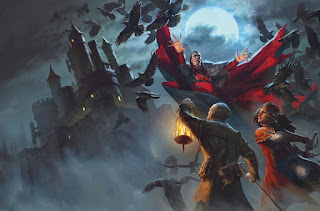 I'm going to preface this review by calling out a few things about my personal thoughts and feelings before I get into the review proper.  As the newest version of an old-school edgy campaign setting from the TSR days Van Richten's Guide has been extremely polarizing in it's reception by the RPG community.  I really enjoyed the original I6 as well as the campaign setting, supplements, and adventures for Ravenloft in 2nd edition.  I thought the black and white art style really suited the mood and feel of the setting, and although it's reliance on pre-existing tropes has often been a criticism of older Ravenloft material, I genuinely enjoyed the feeling that any Hammer or Universal horror film could be directly ported into my D&D game.  So what I'm saying is that as a 49 year old gamer who's been playing D&D since 1983 I really enjoyed Ravenloft's initial run through TSR and wasn't necessarily looking for a shift in tone or feel.  But, none of us longtime fans should look at a setting and assume because the tone or feel has shifted from what we initially enjoyed that that makes the new version inherently bad, or 'less-than' the old version.

So having said all of that in the name of clarity and full-disclosure, as I said before; I'll be taking an objective look at Van Richten's Guide To Ravenloft.

The first thing that I think needs to be recognized about this newest book is that it really doesn't fit into any familiar categories of books that Wizards Of The Coast have published before.  I opened the book expecting a detailed campaign setting and instead what I got was a campaign toolkit.  This will no doubt disappoint many pre-existing fans who were hoping for a 5e update of much of their beloved earlier material, as well as potentially seeming a bit complicated and vague to new players hoping to crack the book open and get right to it.  My initial impression was that this was disappointing and a bit of a failing but upon further reflection it actually seems genius to me.  By laying bare the structure of how to build domains and Darklords and what Ravenloft more or less 'is' the book allows the DM to easily create their own unique content, or for us old-time fans to port over several thousand pages of content in a way that a 256 page single volume was never going to be able to do.  If you're a new DM and you want a campaign ready to go as written, this might not be the right choice for you, but if you want something that feels entirely unconstrained by it's page count this book is terrific.

To the subject of the domains themselves as laid out in the book there is some tremendous content and ideas but my main criticism is none of them get quite the attention they deserve.  My favourite features of the Domains Of Ravenloft section is that there are two entirely new domains that draw on entirely new and distinct cultures for inspiration, as well as a few of the existing domains being given complete make-overs (I LOVE what the new book has done with Souragne!).

The section of the book that has thus far seemed to be the biggest target for criticism online has been the section on Horror Adventures themselves.  This section in addition to addressing setting mood and creating atmosphere also brings up the subject of running horror games in a safe and comfortable (real world) setting.  This is the part of the book that players of my generation in particular seem to have huge issues with.  The simple fact of the matter is that we are living in the 21st century and there should be no issue with writing horror content with 21st century sensibilities in mind.  If I personally have a criticism of how this content was included it would simply be that it feels like it belongs more in the core Dungeon Master's Guide than in this book, but given that it wasn't included in the DMG this is the logical place for it. 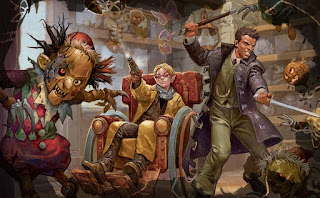 Separate from the individual sections of the book themselves there are two other elements of the book I would like to call out; one positive, one negative.

On the positive side in spite of my fondness for the original Ravenloft art style, I have to say I really enjoyed the art in this new book.  One of the subtle things the art does is that in many of the isolated character images it simply looks like regular 5e artwork that could be in any core book, without anything sinister or horrific about it.  But in some of the action images (where admittedly the heroes are still looking very heroic) the sense of 'wrongness' is extremely well executed.  This image of a Tiefling is one of the best pieces of horror art I've seen for any D&D product. 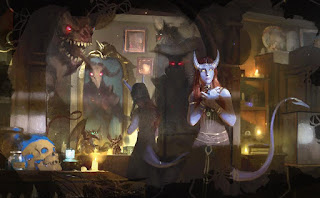 My last remaining criticism (I'm really going to try not to rant here) is; how lazy some of the writing feels.  I know saying how lazy it 'feels' may seem a bit unfair but there are a few things with the updated domains that just felt like minimal effort was applied.  The two that stick out like sore thumbs to me are the updates to the Darklords of Falkovnia and Lamordia.  In the case of both domains the previous male Darklords were replaced with female Darklords, this is NOT my problem at all.  My problem is these two new Darklords names could only have been lazier if they took the male characters names and just added 'ette' onto the end of them.  Vladeslav is now Vladeska, and Viktor is now Viktra.  I think the reason it annoys me so much is I'm more than happy to get onboard with new characters, so why would you you use their names to constantly remind me that these new characters are effectively sequels?  The other place I found the writing felt lazy was in lieu of stat blocks for named NPCs simply giving them equivalents from the Monster Manual or Dungeon Master's Guide.  I realize this probably radically increased the amount of content that could be included by eliminating bulky stat blocks but it leaves many of these heroes and villains feeling truly underwhelming. 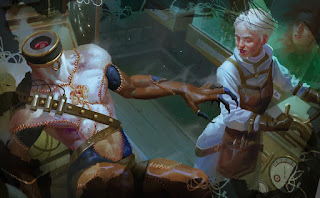 Overall I would highly recommend Van Richten's Guide To Ravenloft to anyone looking to run a 5e D&D horror game or to anyone who wants the tools to update their existing Ravenloft game to 5e!

And as always please support your friendly local game store and purchase this product from those who support our hobby community, many of whom kept their lights on through a truly horror-themed year. 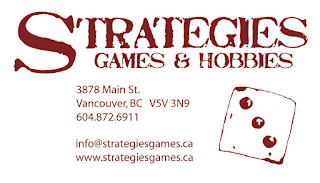