Although Archibald Tavington III's men have been tremendously successful through the first seven scenarios of our ten scenario campaign tragedy finally struck in scenario eight.

A couple of the chosen men of the 95th Rifles have given their lives bravely for the cause but it somehow hit harder when Doctor Theopolis was taken from this world in the prime of his life.  Rest in power Doctor, your legacy lives on through your liberal application of questionable period medications and bloodletting.

In the run up to our final two scenarios Lt Tavington has brought in two men from other units to round out his Silver Bayonet force.

First up joining us from the Royal Marines is Trooper Gibbs. 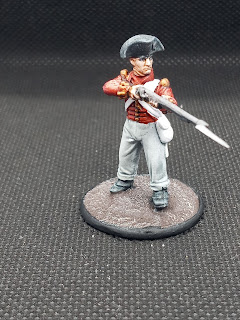 Gibbs adds a character who is steady on his feet but doesn't break the bank budget-wise.

Next is our new Artillerist Sir Simon. 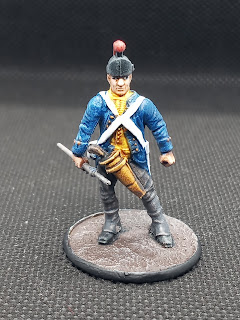 I don't think I'll have a ton of use for an Artillerist in the final two scenarios but I wish I had had one earlier in the campaign as there are a number of swivel guns just laying about on the battlefields of Europe. 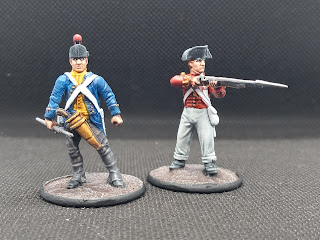 I'm actually thinking about doing some slight restructuring, which could lead to dropping another Rifleman and replacing them with another new character type.  Not 100% committed to that yet but between now and Tuesday we'll see what happens.

Thanks for checking in!