Last night I finished up another Broken Contract model for the Breaker faction.  This time it's Micha Donelly.

One of the great things about the breaker figures for Broken Contract is that they really do convey a worker uprising rather than looking like a bunch of generic futuristic thugs.  Micha is armed with a shovel, that although I'm sure it can be used to great effect is definitely not your 'traditional' armament for a skirmish wargame. 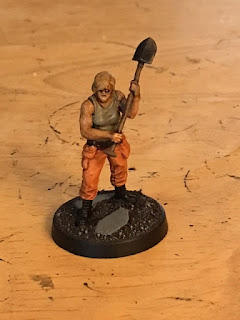 I've decided to go with safety (or prison, depending on your point of view) orange for my Breaker's work clothes.  On this note I'll probably go back tonight or tomorrow and re-do Trest's pants in orange.

I'm really enjoying working my way through these figures and I hope to get a couple more done before my hobby A.D.D. kicks in.

After a longish absence the shipping of the Broken Contract Kickstarter has me circling back to my unpainted figures for some more Ferrum Sky action.

A while back I painted up the forces of Black Squadron Security (the "good guys") for Broken Contract with the intention that they would also blend into This Is Not A Test as some awesome Peace Keeper figures.  Although there is one new BSS figure on the way to supplement my forces I decided to start painting the filthy peasants who are revolting in the mines.

Normally when painting a force I start off with the stock-trooper type models and do the characters and big guys at the end.  This time I decided to deviate from that that and start off with the Breaker Gen-Mod.  For anyone who didn't read my earlier posts about Broken Contract; Gen-Mods are 'genetically-modified' humans who have been enhanced for manual labour.  So far the two figures from Breaker Press for Gen-Mods are what most gamers would conventionally think of as ogre-sized.  It's hard to tell in a single shot but this model is standing on a 40mm base. 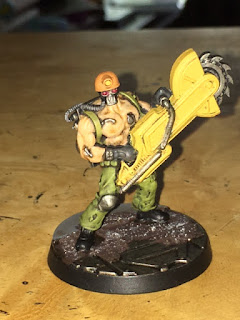 Trest (that's his name), to me is one of the iconic images of the Broken Contract game.  He's huge and clearly not something that actually exists in the real world but his clothing (especially the mining helmet) and over-sized rock-saw ground him in a near-future sort of way.  My biggest challenge in painting him is that I wanted a bright yellow for the saw but I also wanted it a but chipped and scuffed up.  For some reason none of my 3 attempts to get the chipping right worked out so I went for a fresh from Home Depot look instead.

I'm really looking forward to getting more of my Breakers done over the next couple of weeks and I'm hoping as Kickstarters ship I'll see more of these awesome figures painted by other backers as well.
If any of you reading this paint and post pics of your painted Broken Contract figures please link in the comments below, I'd love to see them.

Today I managed to play through my first old solo adventure testing out the flexibility of the current D&D rules and I have to say I think it went fairly smoothly.

As I mentioned before my new 1st level Fighter; Konnor played through Rogue Mage an old solo adventure from Warlock Magazine.  During the course of the adventure I substituted Monster Manual stats for the common creatures (Goblins & Giant Snake) I encountered and made up some of the other creatures stats on the fly.  Where I needed to I generally substituted their Hit Dice as a bonus to be applied to every "to hit" roll save and stat test and that seemed to work reasonably well for the most part.  In addition I realised I would have to make up DCs for saves that I was required to make during the adventure so rather than making them variable I just decided at the outset that every save would have a DC of 15.  Again that seemed to work fairly well and I only failed the important saves during my play-through.

My gauge for saying it worked well is that I didn't have to figure out or change very much on the fly and when I did the current rules provided some pretty easy answers that didn't require me to break the flow of the game.  In hindsight my only challenge was that I shouldn't have chosen a non-TSR adventure first as it meant that I was dealing with a lot (eight) of creatures that weren't in the Monster Manual.  The thing I did like about using what was essentially a short Fighting Fantasy novel written for Basic D&D is that the treasure haul was fairly meagre and doesn't feel like it makes the character unusable or overpowered for my next adventure.

So without any further ado, how did Konnor do?

Rogue Mage starts out with Konnor having been tried and convicted for thievery after falling on hard times.  Before his sentence can be handed down the Guild Of Magicians takes Konnor into custody and offer him a pardon if he can track down a rogue mage from their order and recover an artifact stolen from the Guild.  It's that or the noose so Konnor is off to find the mage!
Outside of town the mage's lair is cut into the mountainside and guarded by goblins, after defeating the guards Konnor journeys into a maze stocked with dangerous monsters (acid spitting Ant-Men, Octopus/Man hybrids, Slime Monsters and a giant snake that can camouflage itself as a pile of treasure).  Once through the maze a chase begins with Konnor catching up to the evil wizard and after scorching him with a scroll that shoots fire, Konnor 'bravely' stabbed him in the back.
During the short adventure Konnor managed to acquire a +1 Short Sword and roughly 200 GP worth of treasure.  He also found 3 potions of healing scattered around but used all of them, plus the one he started with just to make it through to the end.
Mission accomplished, and Konnor walked out with 950 XP (enough for 3rd level) and 6 of his Hit Points left.  As an aside a 1st level Fighter with no CON bonus has 10 Hit Points and I burned through about 29 during this adventure so if Konnor had failed to find any of those healing potions he wouldn't have made it.

So let's see what Konnor looks like now, and why: 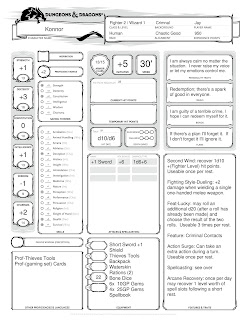 I levelled up twice and decided that I would increase Konnor's Fighter level because it seemed like those were the skills he had used, but I also multi-classed into Wizard because (meta-reason) my next adventure requires a level 1-3 Elf or Magic-User by the old Basic rules, and this seemed the best way to maintain continuity with one character.  I did fairly well on my Hit Point rolls thankfully (no CON bonus) but may become a bit squishier next adventure anyway.  I'm assuming that if Konnor is ready to spellcast at a moment's notice that he cannot carry his shield so his Armour Class will be moving in the wrong direction.

Konnor's next adventure will be "Ghost Of Lion Castle" another old school D&D solo adventure written by Top Secret game designer Merle Rasmussen.  I've got one more adventure planned (Lathan's Gold)  for after that and then my well will have run dry for D&D solo adventures.  If anyone can recommend any additional adventures (that I can actually get my hands on) please let me know.

I'm also considering formally stat'ing up some of the Fighting Fantasy monsters I encountered if that's of any interest to anyone, let me know.