No Terminator squad would be complete without an Assault Cannon armed trooper. 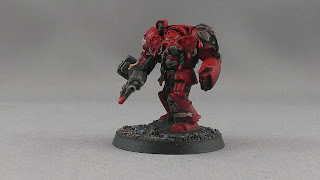 The assault cannon has been my favourite weapon in 40K for years, it's terrific at tearing up lightly armoured infantry and in different iterations of the rules it has even been effective against vehicles. 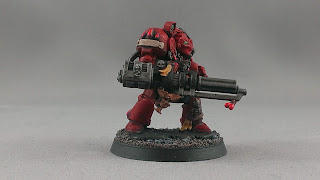 Next up Sgt Lorenzo and then it's time to get started on another unit.

Today the chainfist armed Terminator has joined the squad.  In the original background the chainfist was mostly intended as a tool for penetrating bulkheads and pressure doors but has since become possibly the most popular secondary Terminator weapon available. 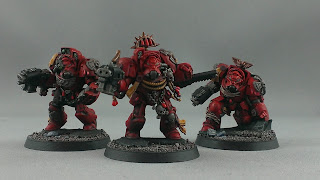 The march of the Blood Angels continues!

Got my second Terminator done this morning.  No radical deviations from yesterday's fig but he does represent progress.  I've got to say now that I'm painting these my only regret is that the contents of Space Hulk weren't slightly more geared to making a second proper Terminator squad.  Having said that I'm still super-excited by how each figure is unique and different. 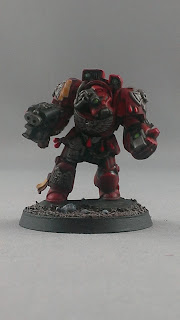 Looking forward to moving on to the chainfist armed figure next!

I'm using the Blood Angel Terminators I painted for Darren over the last year or so as templates/test models for my own figures.  The 2 most significant differences will be that mine are being based exclusively for 40K and will not do double duty in Space Hulk, and, I'm not painting my Librarian "Chapter Approved" colours.

My first model is one of my favourite storm-bolter armed figs from Space Hulk, the one who is crouched down and tearing up a deck plate. 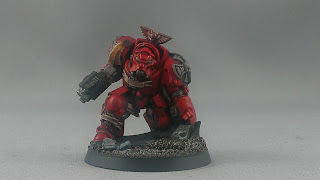 I started off by priming the figure black and then after the primer was dry applying a light spray coat of Army Painter Red.  The armour was then given a wash of Agrax Earthshade before moving on.  The nice thing about the wash is it also draws your attention to areas of separation on the model and helps keep painting neatly.

Once that was dry all the metal was painted Leadbelcher and then given a Nuln Oil wash.  I also painted most of the iconography Dawnstone before giving it a Nuln Oil wash as well.  I decided on the grey tone for the skulls and eagles because in the original flavour text it mentions the icons being stone and it was typically some shade of grey in the original art. 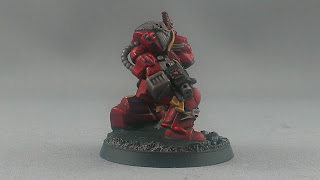 After that I picked out some details.  Sybarite Green for the eyes with a narrow highlight of Necrotite Green through the centre.  All the blood drops were base coated Xereus Purple then highlighted Khador Red Base then washed with Agrax Earthshade before being given a final highlight of Khador Red Base. 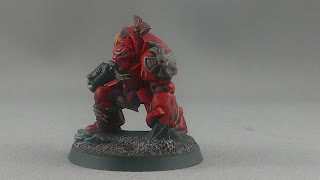 So that is the start of my Blood Angels army.  I feel good about the colours and think I'll end up with a fairly cool looking army.

If anybody has any suggestions please feel free to send them my way.

Everytime I think I'm out...they pull me back in!

Today I finally made a trip to the post office to make good on my lost painting bet with Darren awhile (quite awhile actually) back.

For the third time in three lost painting bets I painted one of his Space Hulk terminators for him and painting that figure made me realize it's been a long time since I painted some 40K figures and one army in particular.  First I'll do the cool hobby part and show you Darren's newest model and then those of you who are interested can read below about my new project. 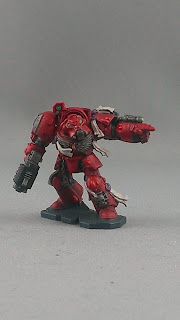 As I'm sure most of you who either follow this blog or know me personally realize I paint ALOT of models.  In my opinion I generally get them done fairly quickly and I seldom struggle to field full forces of finished miniatures in my games.  Having said that there is one army I have been saying I'm going to paint since about 1988 and yet I never get anything finished for it...The Blood Angels.

I don't know what it is, I've gotten at least a dozen false starts on the army and over the years I have painted 5 full Space Marine armies (all of which I was less interested in than Blood Angels) but I never quite get over the hump with Blood Angels.

So, I've decided between now and Christmas this year I'm going to get a decent size Blood Angels army fully painted and it's going to be my best painted GW army to date.  So I plan to actually drive myself to do this while simultaneously slowing down and taking my time with my painting.  I'm going to try painting the army a single figure at a time like RPG miniatures rather than assembly line style the way I usually paint armies.  I hope when I'm done to finally have the army I've always wanted, as well as having a force that is both more competitive in tournament play and easier to transport than my Imperial Guard or Adeptus Arbites army.

I'll be starting off by painting up a Terminator Squad made up of figures from the most recent edition of Space Hulk (generously given to me by my buddy Mark, thanks Mark!).  I'm also going to paint the Librarian from the set to give me my first character for the army.  Beyond that I'm going to pick things up one unit or character at a time and take my time doing the best paint jobs I can.

The last (for now) of my 20mm combat vehicles is now painted.  This time around it was my biker boss.

This was probably one of my favourite vehicles to paint from the Warlands range.  The detail level was excellent, the proportions were good and the rider himself seems like a great character. 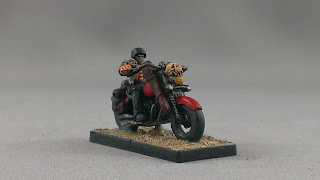 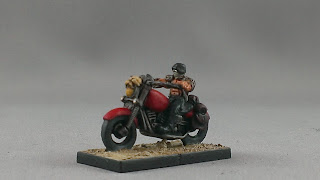 That exhausts my supply of figs for these games until I find some more (any suggestions guys?), and I did get a game of Dark Future in (which was fantastic, much better than I remember it being, so it's back to my lingering projects for me....

This portion of the apocalypse is brought to you by; KAWASAKI

These guys will basically be outriders for my raider force or cycle gang members for a big (Midville?) game of Car Wars. 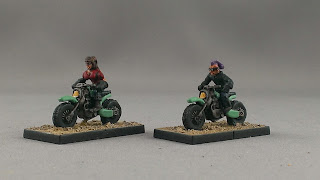 Fairly basic paint jobs but I think they provide a splash of colour and flavour to the mostly drab vehicles I've done so far.

Awhile back I re-painted a Kryptonian Soldier with the intent of using him as a descendant of John Colt (Spartan) and mentioned I might like to re-visit the idea and build a super-team around that character.

Here is the first addition!  I've decided that I'm going to try to add in 1 of each of the basic superhero arch types (strong guy, psychic, blaster/shootist, etc).  So my first addition is a brick type character.  Again this figure came from the same Superman Heroclix set and was a complete re-paint.  The figure is originally meant to be Non one of General Zod's men but after cleaning up the head and re-painting the figure I think he makes a perfect sidekick or partner for John Colt Jr.  The other great thing is the colour scheme means he can also fill in as a generic patriotic US or UK hero as well. 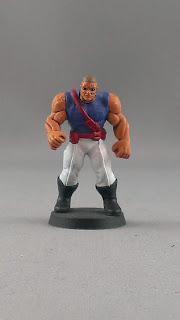 The last of the V8 Interceptors

At last Max and his dog have a stylish vehicle to ride around in!

Not too much new under the sun here, another combination of parts to make up a Warlands duel car.  I'm pretty happy with how this turned out in the end, having a lighter colour on the vehicle also helped the dirt and dust pop a little more. 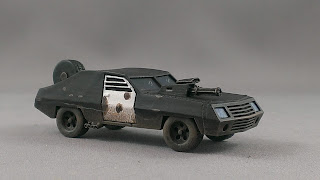 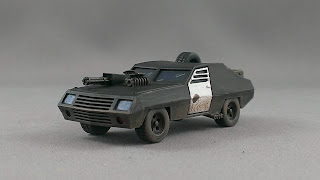 A boy and his dog

....actually that's a different post-apocalyptic movie from the 70s....

The last of the V8 Interceptors is still in the shop getting a last few licks of paint, one day I will abandon the desire to paint white on large flat surfaces and my painting speed will improve greatly, but in the meantime I decided to paint the figures no post apocalyptic vehicles combat game can live without "Mad" Max Rockatansky.

I'm very happy to have figs for Max and his dog, but I have to confess, on the few occasions I have painted 20mm human-sized models I always end up feeling like a pilgrim in an unholy land.  I know at 20mm I should put in a bit more detail work than with say a 15mm model but somehow (maybe just bad luck on my part) all the 20mm models I get seem to be sculpted worse than the 15mm models I get.  Max's dog is great, the figure has the exact right amount of detail and texturing to get a satisfying effect...Max on the other hand is definitely not a great sculpt.  Don't get me wrong the figure is perfectly serviceable and on the tabletop he will look great but upon any close inspection (like say a photo for instance) you can see that his hands are horribly sculpted.  His gun hand is at least twice as long as it should be and his other hand is more claw than hand.  In spite of this I expect the 'cool' factor will distract my opponents from any imperfections in the figure itself. 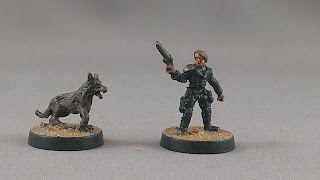 I've got the Interceptor and 3 bikes to do before calling it quits for this stuff until I find some more good models for the genre, but I'm looking forward to the search!

Incidentally I had to postpone my Dark Future game today due to a family issue but hopefully I'll reschedule for next week and then I can show off some gaming pics from the grim "future" of 1995!