The Mole-Shark is a fearsome and terrifying apex predator who's recent appearance in the wasteland has sparked speculation that there are still hidden enclaves out there practising pre-war genetics research for unknown purposes. 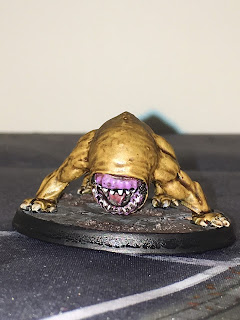 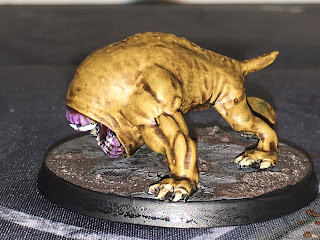 The Mole-Shark is blind and appears to hunt by sense of hearing.  Once attracted to prey it moves with lightning speed both running and jumping as high as 10 feet to get to it's prey by the most direct route possible.  Due to it's lack of scent and vision some warbands have been able to survive attacks by Mole-Sharks by simply going perfectly still and refraining from the use of any weapons or equipment that cause noise.  The Mole-Shark is very clearly not a naturally evolved creature as it is capable of consuming far more than it's lean body and stomach allow it store.  This frequently results in the Mole-Shark almost immediately expelling the bulk of any creature it consumes.

There has been much speculation about the origins (and purpose) of the Mole-Shark with many more questions being asked than answers being given.  The Mole-Shark's true place in the eco-system may never be known.

Email ThisBlogThis!Share to TwitterShare to FacebookShare to Pinterest
Labels: hasslefree, This Is Not A Test

This figure has literally been "the next thing I'm going to paint" for over 3 months.  I back the most recent Relic Blade Kickstarter pretty much with the goal of getting this model to add to my growing collection of 'classic' D&D monsters.

As mentioned the Basilisk is a classic fantasy monster (even you Harry Potter fans got this in one of your books/movies) that has been a challenging encounter for adventuring parties for years. 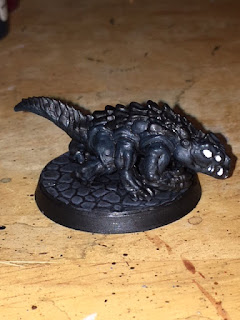 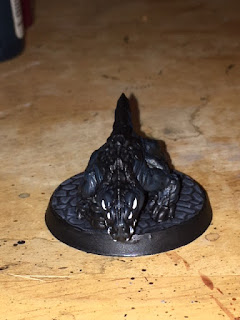 I generally think of a Basilisk as being much bigger but in the world of Relic Blade (that this model comes from) it's more of a wolf-sized attack animal for The Wretched Hive faction.  Although the model is arguably a bit on the small side that's more than a fair trade off for the fact that it is one of the best sculpted and executed Basilisk models available. 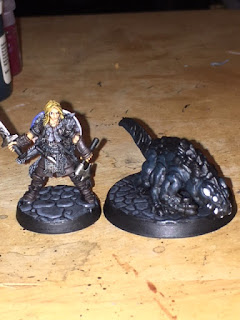 After I get a few more things done I'm hoping to circle back to my Relic Blade figures and get my 3 Iguan models done so I can start playing games with  my Wretched Hive.

I wasn't aware until I sat down to type this that I haven't posted in a month, ouch.  I've actually barely hobbied in a month which feels even worse.  Hopefully this weekend I'll be cranking out a few different small projects.

This morning I finished a character model for a solo D&D game module I found online and hope to try out on Monday; Rolf The Barbarian. 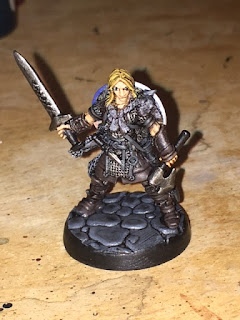 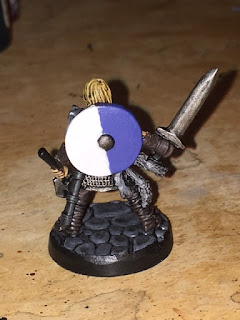 Rolf is a Reaper Pathfinder miniature and one of the things I really liked about him is that he breaks the mould of the traditional huge hulking barbarian.  As a character Rolf's strongest traits are Dexterity and Constitution so a more Heroquesty Barbarian would have been far too big to represent Rolf.

One of the other things worth calling out is that it seems most of the 'adventurer' type figures in the Reaper Pathfinder line seem well layered with lots of bits and pieces of equipment and armour without feeling like they have a lot of decorative nonsense on the figures.

Hopefully by Tuesday I'll be able to update you on how Rolf did on his first adventure!