After my game yesterday I decided to add one more wasteland-styled car so I can swap out at least one of my Warthogs next time I play with my raider-type force.  Over the years I've liked two different aesthetics for my duelling cars; the throwback Mad Max style seen here and some more polished Car Wars near future cars that I'm planning on doing next.

For this vehicle I was able to find a Hot Wheels '32 Ford.  I drilled out the posts on the bottom and took the car apart primarily so I could replace the stock flat untextured  wheels with the off-road wheels from a Matchbox dune-buggy.  I added a small single machine gun to the roof that is just a cutoff inverted end of a Heavy Gear missile launcher.  I added some mesh to the front windscreen area slapped some paint on and I'm calling it done. 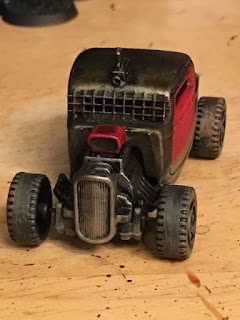 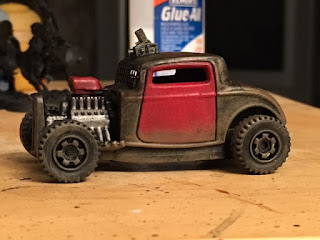 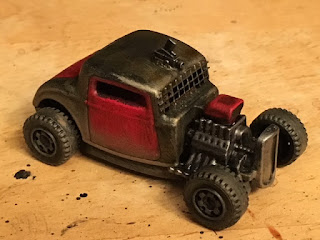 Although I'll be using them for Gaslands my next 3-4 cars will definitely be inspired by old-school Car Wars art rather than Mad Max movies.

For any fans of the genre whether they're gamers or not I have to say this is a really fun game.  Fairly rules-light and straight forward.  You can literally unpack some Hot Wheels or Matchbox cars and start playing right away.  I managed to get in 2 games and the rules seemed very straightforward and balanced and neither myself or my opponent ever got bogged down in complex decision making so the games played fairly quickly and we were both fully engaged the whole time.  I would definitely recommend Gaslands to anyone who plays Car Wars and would like something lighter or even anyone who just likes Mad Max movies and wants to game them.
I'm definitely looking forward to playing more in the near future.

Now, onto the cars themselves.
A funny thing happened last night on my way to the arena.  As anyone who's been following my blog the past few years would know I've accumulated a small collection of 20mm vehicles over the past few years and was definitely ready for today's game.  Except, I couldn't find the storage box with my cars in it.  So after wrapping up my D&D session last night around 1:45am I needed to quickly knock out 3 vehicles for today's game.  I had 1 converted and was able to fake my way through it by touching up 2 other cars that were almost game ready out of the package.

First up is my armoured ram truck.  This is a vehicle from Mattel's Fast And The Furious toy line and was perfect for me as I was really stoked about the idea of having a heavy ram plate equipped vehicle.  The van came with the dozer blade and roll bars already attached (which was great!) but I had to add wheels because the original truck came with treads instead of wheels.  It was a super quick paint job but I'm happy with how it turned out and it was the star of the game for me in the second game I played. 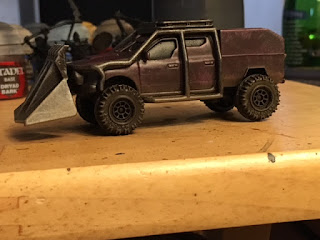 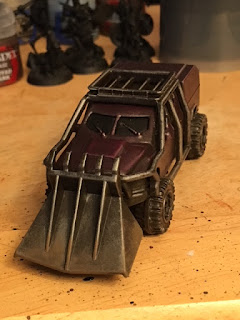 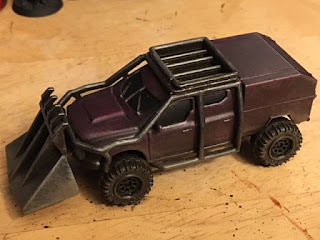 Next up I had purchased 2 Halo Warthogs from a standard Hot Wheels assortment.  Originally I planned to do some real work on these by due to losing my other cars they got pressed into emergency service unconverted.  Basically I sprayed the undersides brown, repainted the gun and roll cage, weathered them a bit and then went to bed.  Some dullcote in the morning and they were ready for the table. 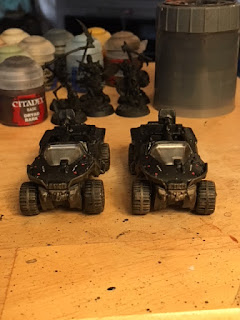 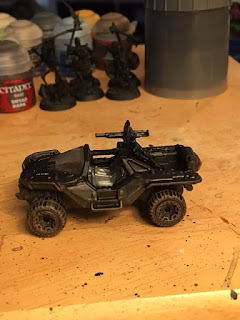 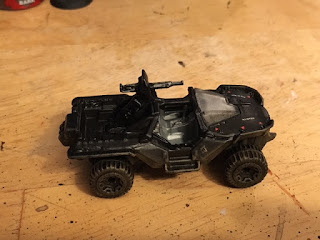 I'm definitely going to get at least 3 more vehicles done this week....I'll try not to lose them this time.