Recently my friend Kevin painted up Knight Models new Enchantress model and it made me a little bit nostalgic.  A few short years ago I was very excited about Knight Models superhero models for both DC and Marvel and was really enjoying their games, but, due to some really disappointing interactions with both the company's customer service and social media outreach I packed all my stuff up over a year ago and just walked away.

Seeing Kevin's Enchantress reminded me that I never did paint my last two Suicide Squad models; Rick Flag and Enchantress.  I decided to go back and paint them up and it led me to another decision.  But first up here's Rick Flag: 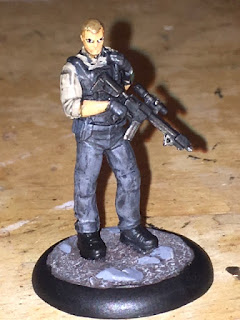 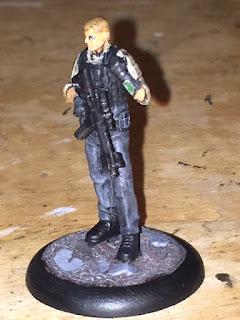 I've decided that instead of painting up more Infinity models to play Last Days next month I'm actually going to build my force out of some Knight Models stuff.  In preparation for playing through the Suicide Squad campaign way back when with Kevin (which sadly never happened) I had purchased some additional law-enforcement/military models that I think would work well for Last Days.  I need to dig those guys out but I think there's some more in the pipeline.

Maybe I'm back in, maybe I'm not.  We'll find out soon enough.

I think I just had one of those feel good/bad moments.  I feel great because I finally got my Shadespire stuff done, but on the other hand given that the whole thing probably only took me three hours from start to finish I feel a bit crappy about these guys having sat on my painting desk primed and ready for a year without getting touched.

My full force of seven models is now done for the Sepulchral Guard. 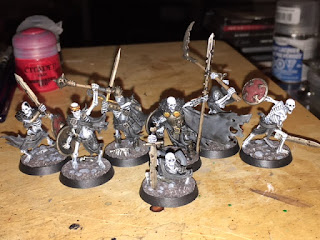 I really like these as some characterful undead models and I hope that in addition to Warhammer Underworlds Games Workshop continues on with the practise of providing some more of their models with textured bases.  They saved me tons of time and hassle and in my opinion really look good on the finished pieces.

Having painted my three petitioners yesterday my additions today were three of the 'named' heroes for the Sepulchral Guard.

First up, The Harvester 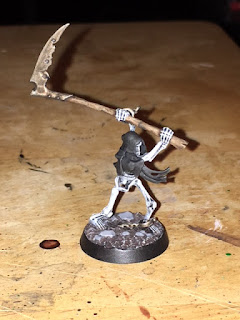 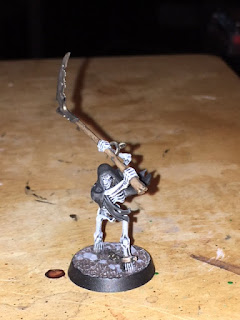 Next we have The Prince Of Dust 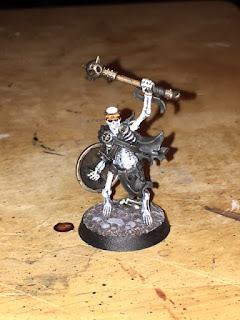 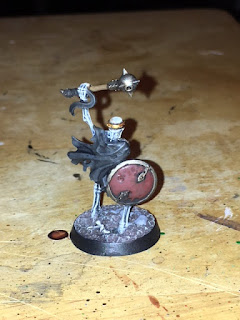 And finally The Champion 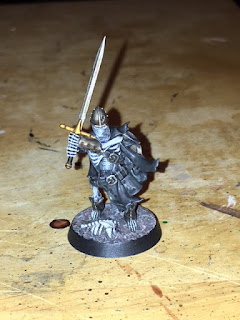 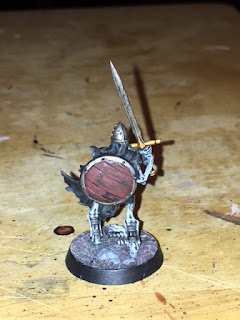 As much as I painted these for the purpose of playing Warhammer Underworlds I'm sure they'll show up in some other games as well.  How could they not?  They're probably the nicest skeleton models that I own.

I better get my Shadespire stuff done before Nightvault comes out

Games Workshop has been teasing season 2 of their Warhammer Underworlds game; Nightvault.  When Shadespire initially came out I wasn't really all that excited.  It looked like a decent enough game but playing miniatures on a board wrapped in a competitive-play style just isn't really my thing.
After watching my friends play for about a year and seeing more spring up around the game as well as the new starter having some more undead for Age Of Sigmar in it I've decided to jump in.

Having said that, even though I didn't play Shadespire I did pick up the Sepulchral Guard figures.  Now that I'm looking at new figures its made me aware that these have been sitting unpainted for a year and and I should get off my butt and paint them before the new figures come out next week.
The Sepulchral Guard set is only seven figures and I did paint one of them (The Sepulchral Warden) in December last year.  Of the six remaining figures there are three unique characters and three  similar figures called the Petitioners, I decided to start with the Petitioners. 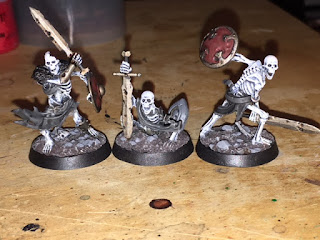 At their core the Petitioners are basically nice new sculpts of the basic Warhammer skeletons. They were fairly easy to paint with a little dry-brushing and some washes going a very long way.

That's four of the seven models done.  If I can get the other three done this week I won't have to feel bad about getting the Nightvault models.

I finished (mostly) one more figure late last night to join my special forces team.  I say 'mostly' because macro-photography has revealed more than a few areas that need some touching up.

This is another USAriadna figure for Infinity and I figured she looks just different enough from the other two troopers to stand out as a leader. 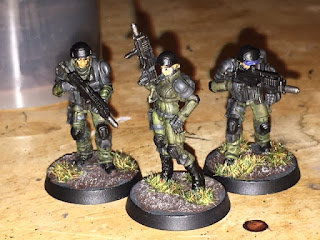 I'm going to take a short pause from the Apocalypse to paint a fantasy figure and start costing out my force and figuring out what kind of fanciness I can afford to add.

Email ThisBlogThis!Share to TwitterShare to FacebookShare to Pinterest
Labels: Infinity, Last Days, This Is Not A Test

They don't 'survive' in the post-apocalypse, they 'thrive' in it!

I've been playing a lot of post-apocalyptic games lately and as much as I've done the wacky (lots of Gamma World inspired stuff) I've decided to take a crack at painting some stuff that's more in line with some of the other fiction and games I've been in to.

One of the popular concepts in fiction and gaming is a pre-apocalypse society having put fail safes into place should the apocalypse happen.  This is the basic idea behind the video game The Division as well as the roots of both The Brotherhood Of Steel and The Enclave in Fallout.  For myself I've been reading a fiction series called The Remaining and am an old enough gamer to have played The Morrow Project RPG.

To that end I've decided to paint some high-tech near-future military figures with the idea of using them both as Reclaimers for This Is Not A Test and professional operators for Last Days. 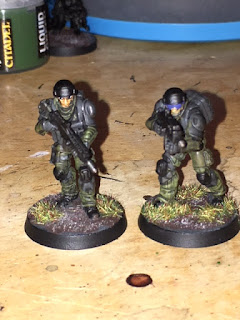 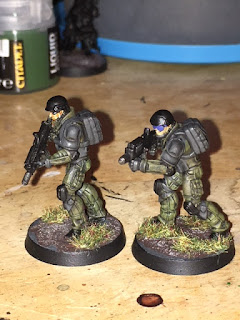 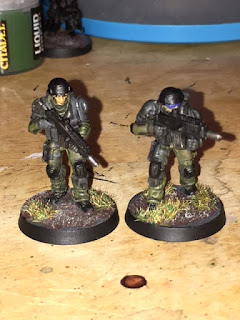 I have an assortment of USAriadna models for Infinity that should be perfect.  I started with two basic assault rifle armed troopers but if I stick with it I've got some support weapon models to add in later.

Not sure how far I'll take this but I expect to paint at least a few more of these before I get distracted by the next shiny thing.

Email ThisBlogThis!Share to TwitterShare to FacebookShare to Pinterest
Labels: Infinity, Last Days, This Is Not A Test

Ranger of many systems!

I had actually prepped this miniature months ago with the thought of using it for a D&D game but in the end opted out and went with the figure that became Rolf Rolfsson.  He's been sitting primed without a purpose on my desk since then and the upcoming release of Rangers Of Shadow Deep made me decide to finally slap some paint on him thinking he might end up being the titular Ranger leading my warband. 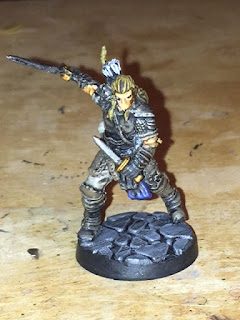 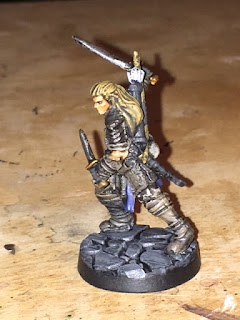 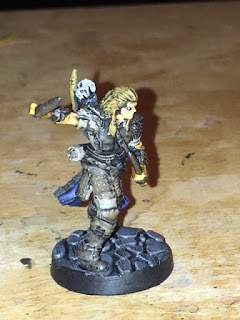 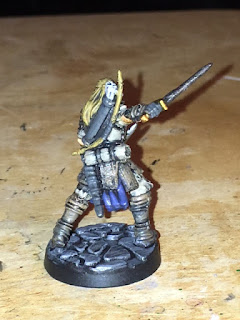 I've lost track but this is either the third or fourth different miniature I've painted that is based off the 'Valeros Iconic Fighter' from Pathfinder.  Its the current WizKids Pathfinder model and like all of its predecessors works really well for a lot of adventurers due to his piecemeal armour and full assortment of weapons.

Hopefully this guy will work out and I'll eventually settle on a name.

I've painted my final cat, Yul.  Because every successful post-apocalyptic warband needs a Siamese cat with an M-16. 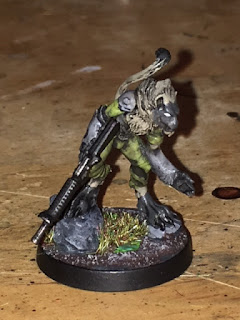 I've got to properly points out my stuff for my This Is Not A Test game on Thursday.  I think I'm under by roughly 50 barter script so there might be a hired gun in my future.  Perhaps some sort of...robot?

Anyhow, probably a one or two day break before starting on anything new and then probably some more stuff for D&D.

Email ThisBlogThis!Share to TwitterShare to FacebookShare to Pinterest
Labels: Gamma World, Infinity, Mutant Crawl Classics, This Is Not A Test

Four down, one to go!

My second last catman, Cecil The Lion-Man is ready to rock!

Reaper has a few figs on their site filled as a Steampunk Wizard Of Oz group that I thought were pretty cool.  The Tin Woodsman might be an add for later but as I was looking for cat-people their take on the Cowardly Lion was my first choice. 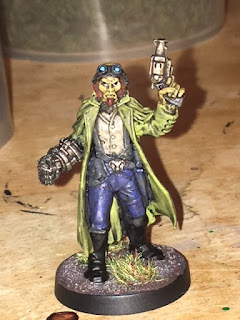 For his skin and hair/mane I went for a fairly basic lion colour scheme but once I was holding him in my hand it was super-obvious that had I painted his skin fist and goggles red he would look exactly like a certain boy from hell.

Email ThisBlogThis!Share to TwitterShare to FacebookShare to Pinterest
Labels: Gamma World, Mutant Crawl Classics, Reaper, This Is Not A Test

I've moved past the monstrously large cats and into the 'normal' (doesn't quite seem like the right word) man-sized cats. 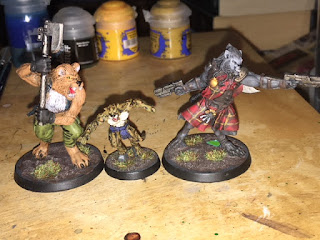 Julio Jaguar will be my psychic mutant.  Julio is a figure from an old Pulp City three pack; the Dark Solar pack.  I bought that pack to use Solar as a generic superhero in a superhero RPG I was playing in a few years ago, I guess I lucked out that I had an extra catman laying around.


The nice thing is that Julio has way less (as in no) tech gear or equipment so although I'm painting him for a This Is Not A Test game in a few days he's more perfect than most of the figures I've painted for Mutant Crawl Classics.

Two more cat-people are hanging out on my painting desk and will hopefully be done before the weekend is out.

Email ThisBlogThis!Share to TwitterShare to FacebookShare to Pinterest
Labels: Gamma World, Infinity, Mutant Crawl Classics, Pulp City, Reaper, This Is Not A Test

My first 2 mutant big cats are done.  I say big cats because both of these dudes are on 40mm bases and are closer to ogre-sized than to man-sized. 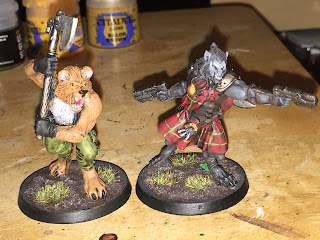 I finished up my Lykoi and although I'm not entirely happy with how the tartan turned out for a first attempt I'm relatively pleased.  I may have to dig through my box of unpainted models and see if I have another kilt wearing model I can experiment on. 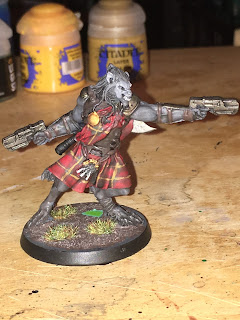 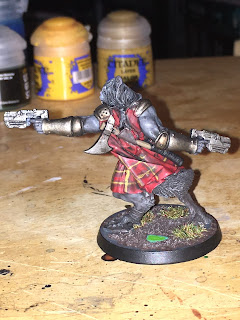 I did these 2 first because I was excited about the models.  It's time now to start constructing a roster and figuring out what else I need to paint to make up a starting force for This Is Not A Test.

Email ThisBlogThis!Share to TwitterShare to FacebookShare to Pinterest
Labels: Gamma World, Infinity, Mutant Crawl Classics, Reaper, This Is Not A Test

I was hoping to finish my second cat today but his tartan is taking longer than I expected (I honestly surprised myself that the words I just typed form a sentence).

My next cat, and probably leader figure is Lykoi.  A lykoi is a relatively new breed of cat that looks like a wolf.  This allowed me to use one of the awesome Infinity antipode models in my feline force. 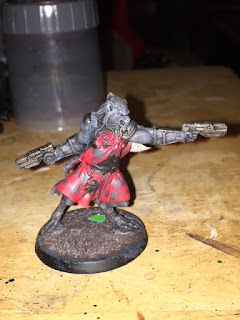 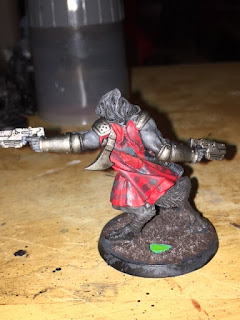 I'm usually a fairly boring painter and don't try new things as often as I should but I decided to try something new and am working on a tartan.  I found a few great articles online about painting tartans and I have to say like a lot of things it becomes far less daunting when someone breaks it down step-by-step.

Tomorrow is a shorter day at work so with any luck I can finish Lykoi and hopefully get atleast one or two other models started.