Clarence the Cleric of Cthulhu

My buddy Darren had wanted to do an OLD (40 years old) D&D adventure from Judges Guild using the Dungeon Crawl Classics rules.  A group of us each rolled up characters the way the ancients intended (3d6 in order rolled) and I ended up with a cleric.

I have a lot of experience playing Clerics in other game systems but Dungeon Crawl Classics can yield some odd (and harsh) results.  Clarence's pre-adventuring 'profession' was a slave so I wanted him to have a very rough appearance.  Statistically he was also on  the low end of the spectrum with all 3 of his physical traits being below 10.

I decided to build a figure out of the Bretonian Men-At-Amrs (why didn't I buy more of those when they were around?) as the equipment would look right, but it would also be easy to end up with a poor, rough looking fellow. 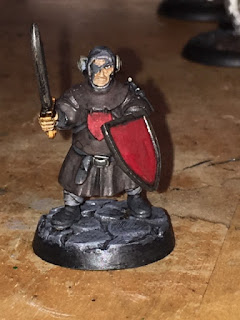 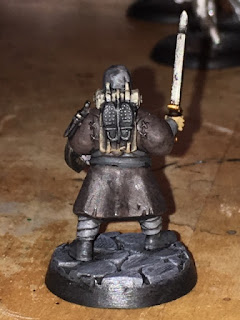 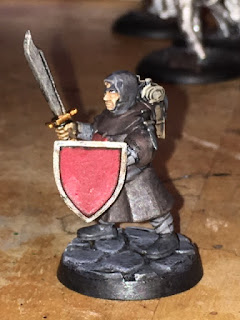 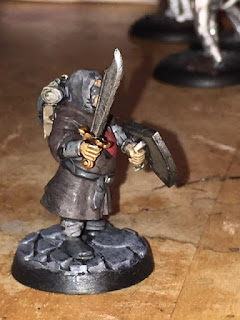 Overall I'm happy with how Clarence turned out as a miniature and he was CRAZY effective in our game!  I had generally terrible luck with my rolls in combat as well as my saving throws but if I recall correctly EVERY roll I made to either cast a spell or turn unholy yielded a result of 19 or higher!  In Dungeon Crawl Classics your spells and turn effects become significantly more powerful if you roll high numbers.

Tegal Manor was conceived as a one-shot so I don't know if Clarence will ever return but I would certainly enjoy using the character again.