Oddly enough even though in D&D I regularly play fairly vanilla human fighters I've never played a simple warrior in DCC.  That is until now.  Meet Fergal: 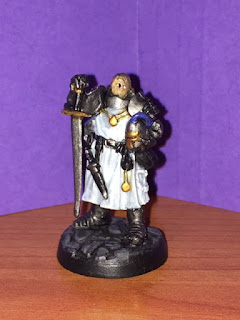 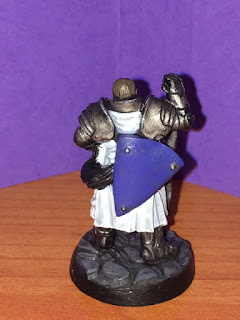 Fergal is a Reaper Bones human paladin miniature that I got to try something new on.  Originally I planned to go with the same blue shield and tabbard as my last few fantasy figures again with an eye towards eventually re-purposing them as a warband but then I took a slight turn.  I've always liked the idea of white clothes for fantasy holy warriors but I've never been able to do an even passable job painting white on miniatures.  This time out I decided to try the new Citadel Contrast Apothecary White paint.  I'm fairly happy with how it turned out and I may try it again on another model soon.

Anyway Fergal's got; his sword, his board and he's ready to lay waste to some monsters.  Either that or meet the fate of most DCC characters and go to the graveyard or ripped up character sheets.

While exploring the good ship Sea Ghost (I still want to rename it 'The Fiend') during the second half of Sinister Secret Of Saltmarsh our party liberated a Pseudo Dragon!  In our next game the Pseudo Dragon will be added to our adventuring party so I was really excited to find out that WizKids had released a model for it. 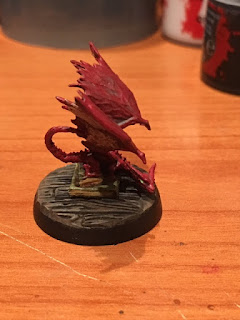 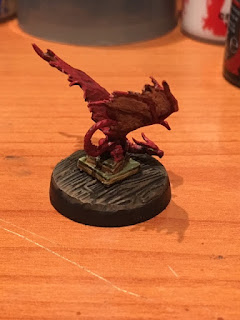 I think the two things I like most about this model are the fact that the pose (including the books the dragon is perched on) is a perfect reproduction of the actual image from the Monster Manual along with the fact that although the model is quite small it's not so tiny that its details can't be distinguished.  Truthfully before I got this miniature I had another Pseudo Dragon model from a different miniature company that was closer in correct scale to a 28mm adventurer model and that made it so tiny that it really just looked like a blob with minuscule wings.  This is definitely one of those times where taking liberties with scale and/or proportions was the right choice.

I'm looking forward to the Pseudo Dragon joining our group and if I can find a suitable figure for Oceanus we may cross the point where we have as many NPCs as PCs in our adventuring party.