It looks like I'm back to the Blood Angels for a week or two.  Shortly after Christmas a friend and I split a Deathstorm box set with him starting a shiny new Tyranid army and me getting some much needed reinforcements for my Blood Angels.  When I've got these figs done I will be able to field 2000 points worth of Blood Angels (and it still fits in a single figure case!)

There are 4 units in the Deathstorm box but I will be painting them as 2 units; Terminators, and Death Company. 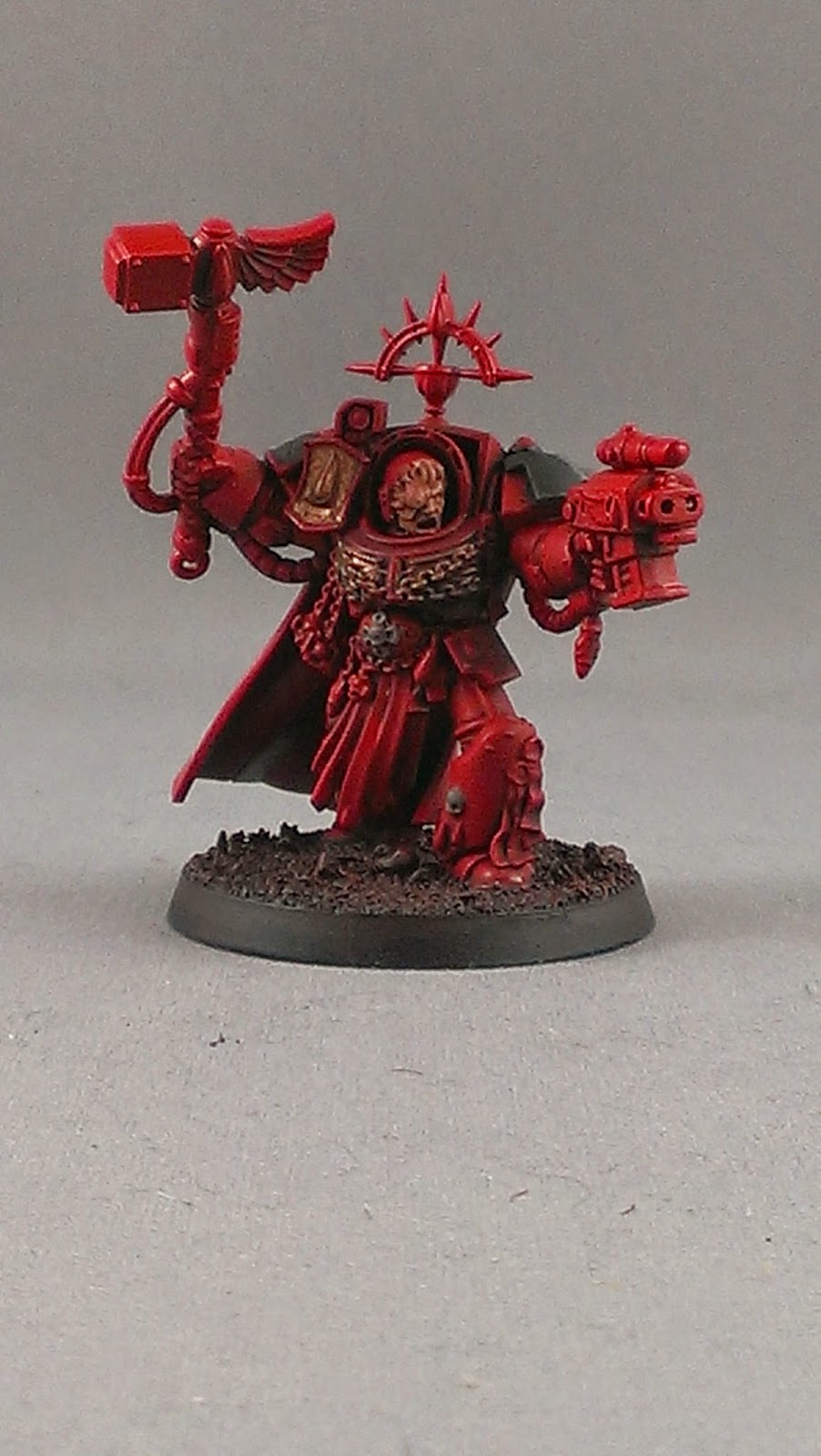 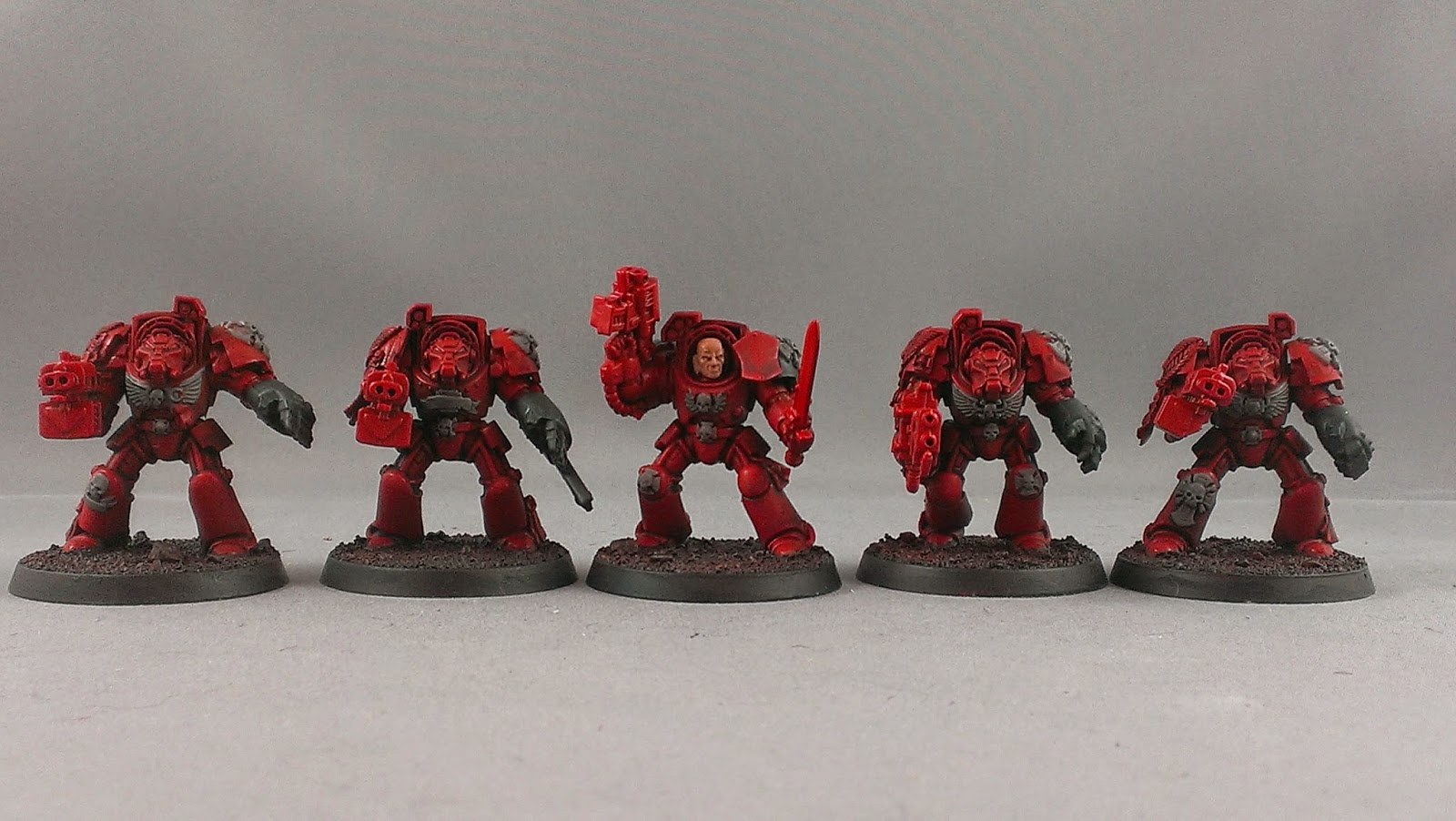 Squad Alphaeus is the Terminator squad in the box.  Veteran Sergeant Alphaeus is a soldier with a long history serving under Captain Karlaen and also features prominently in the Deathstorm novella.  I did add the Forgeworld Terminator shoulder pads to Squad Alphaeus to dress them up a bit and make sure they don't look too flat next to my Space Hulk Terminators. 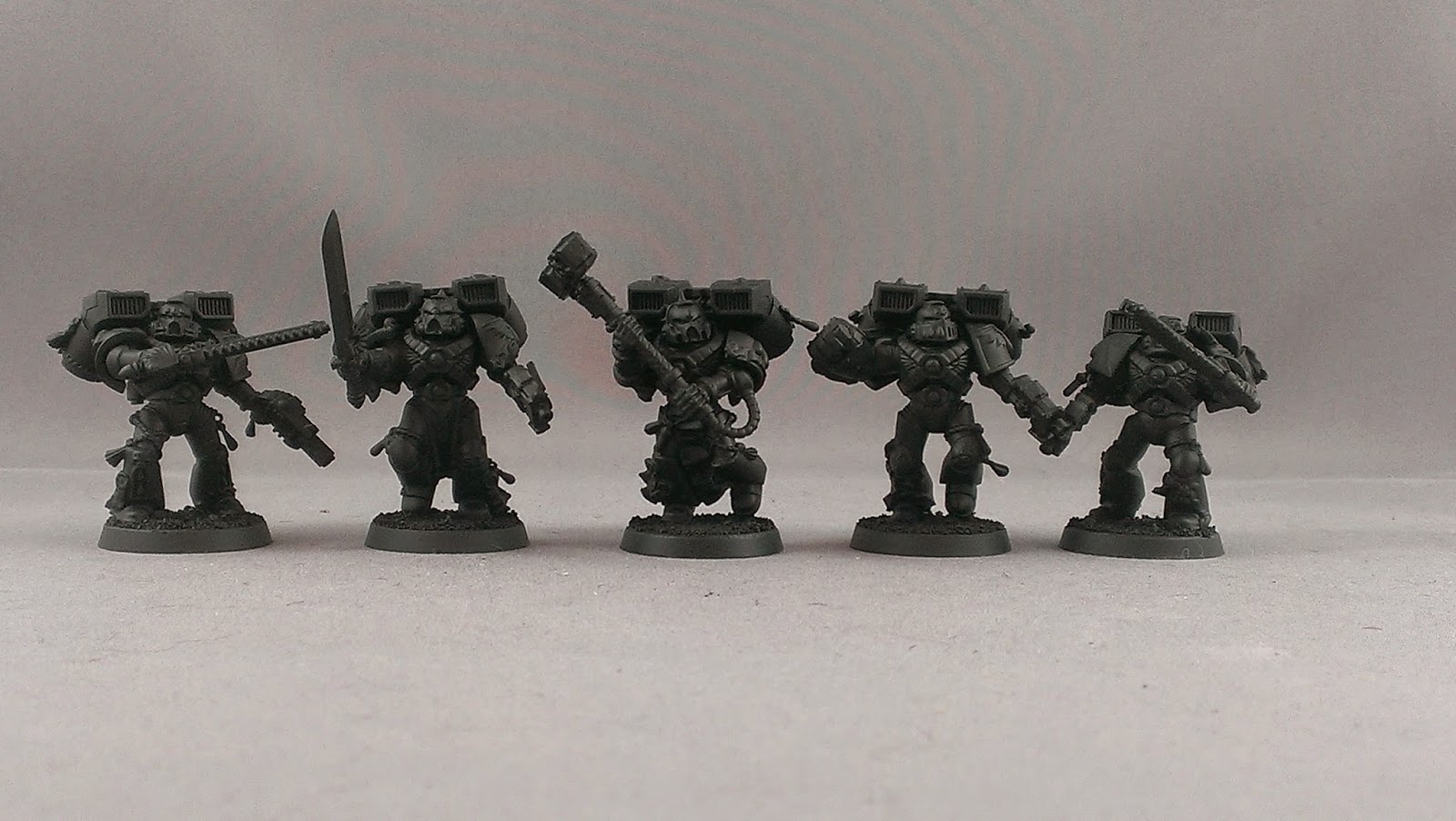 The Death Company are led by veteran marine Raphen (the one with the Thunder hammer) and a re equipped with jump packs.  This is another slight detour from the models that actually came in the box as I purchased a squad of Assault Marines so I could give the models torsos that include the  harness for their jump packs. 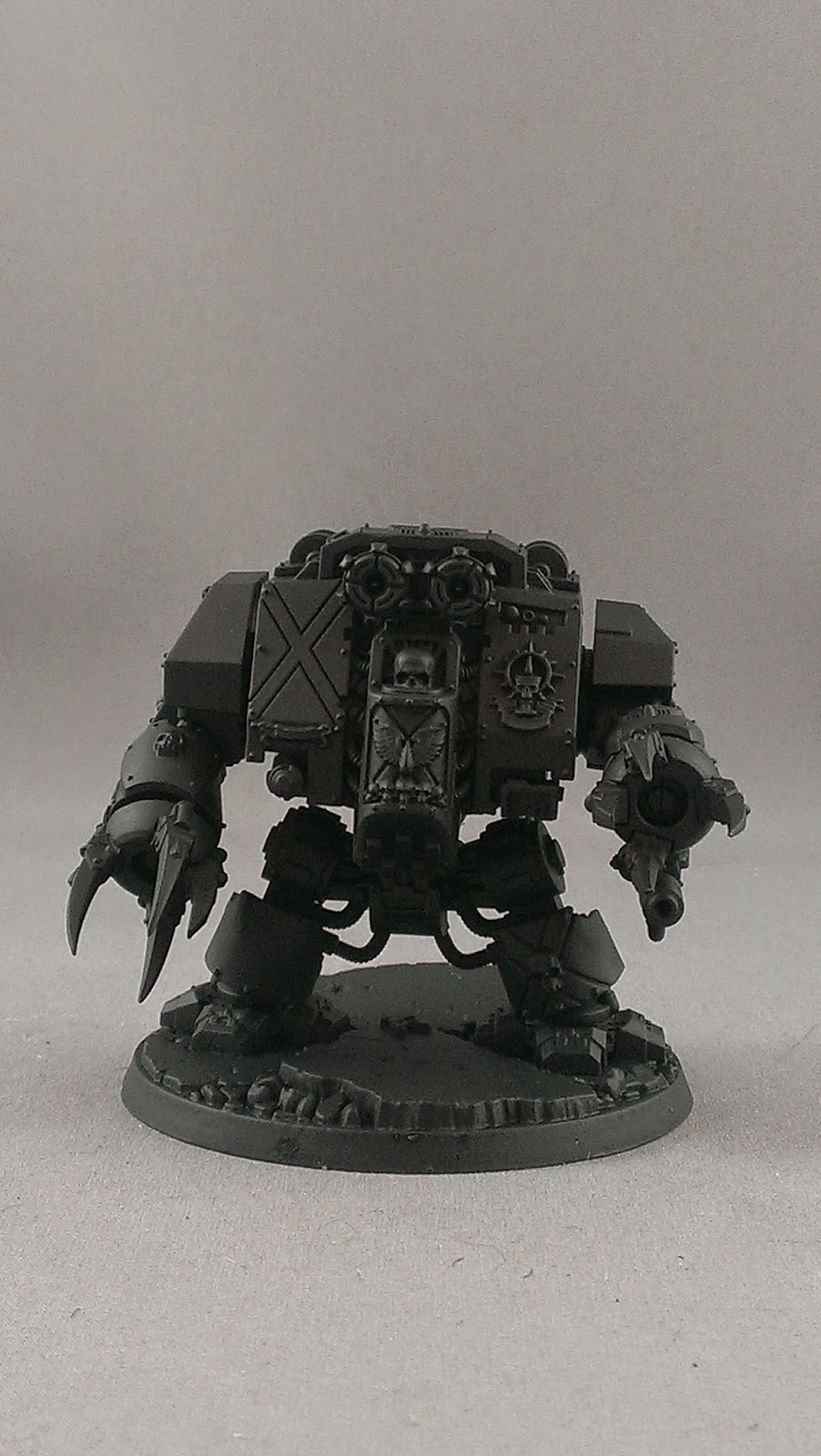 Cassor is a Death Company Dreadnought.  It's funny but after years of choosing something else every time I was deciding between the Furioso Dreadnought kit or "some thing else" now that I finally have one I think I want to get another.

So that will get me to 2000 points for my Blood Angels, which I'm pretty happy with given that I started off with no set goal in mind.  I've committed to not getting any more models until I'm done painting these but I think I'm going to treat myself to that new Sanguinary Priest model as a reward when I get all of this done!

Infinity - Do I play this game or not?

Infinity might be the miniature game I currently have the strangest relationship with.  I love the look of the models and the world and I've painted up a reasonable number of Infinity figures over the years, I've also played at least a dozen games and yet...I still don't know if I really play this game or not....

Infinity is one of the most visually stunning miniature games currently on the market and it has a really deep rules set that lets you do pretty much anything you want during a game.  But, and this is kind of a big but, it's generally been poorly translated, confusingly laid out and really unforgiving when you play against a more experienced player.

Anyway here's the hacker for my new team. 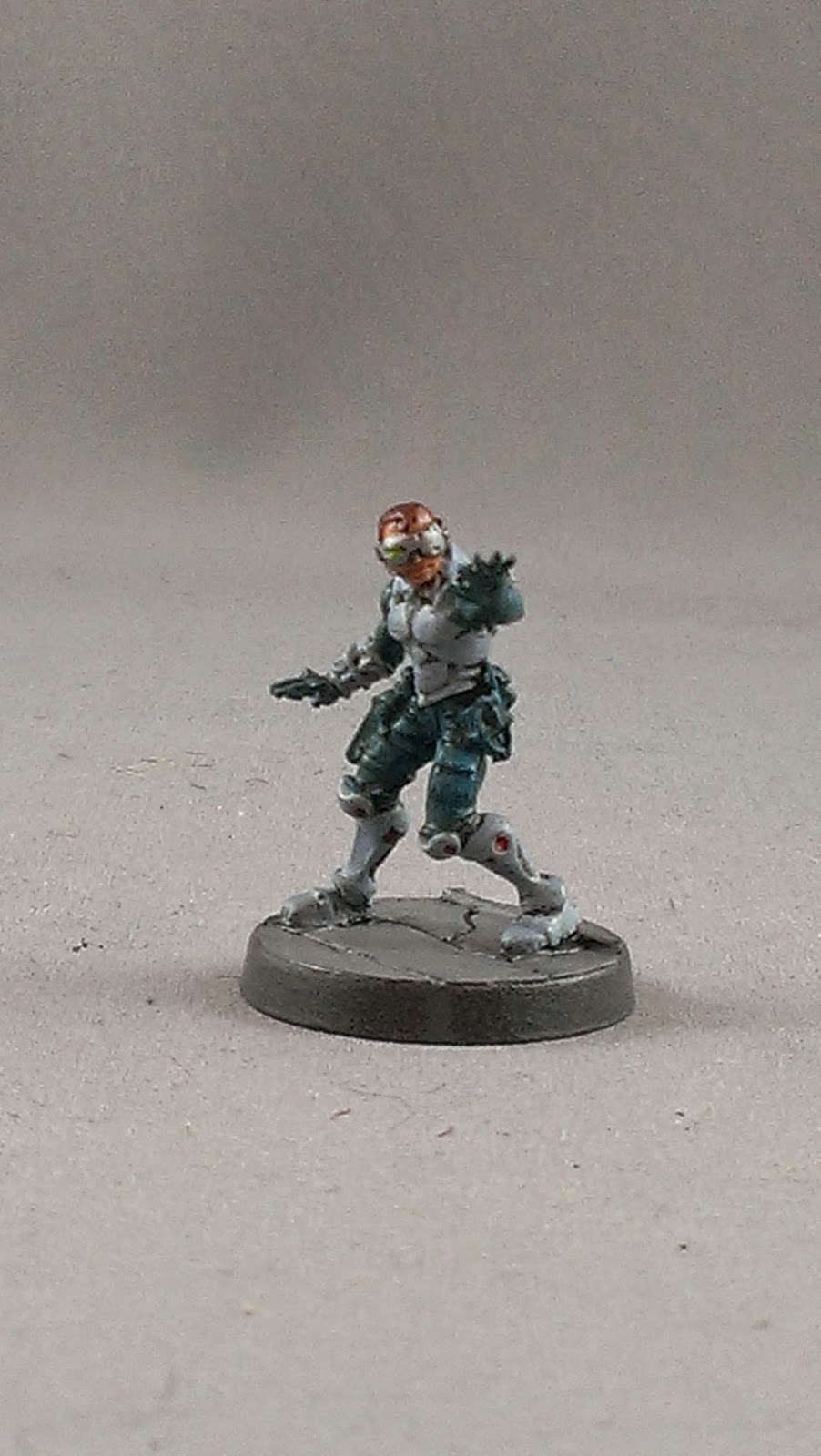 Email ThisBlogThis!Share to TwitterShare to FacebookShare to Pinterest
Labels: Infinity

I took a break from stuff I'm currently gaming with or planning to game with to go back and do some stuff I just plain want.

At some point when I actually play a game of Judge Dredd I'm going to have a pretty good sized Justice Department.  Tonight I finished up the three named female Judges I have figures for. 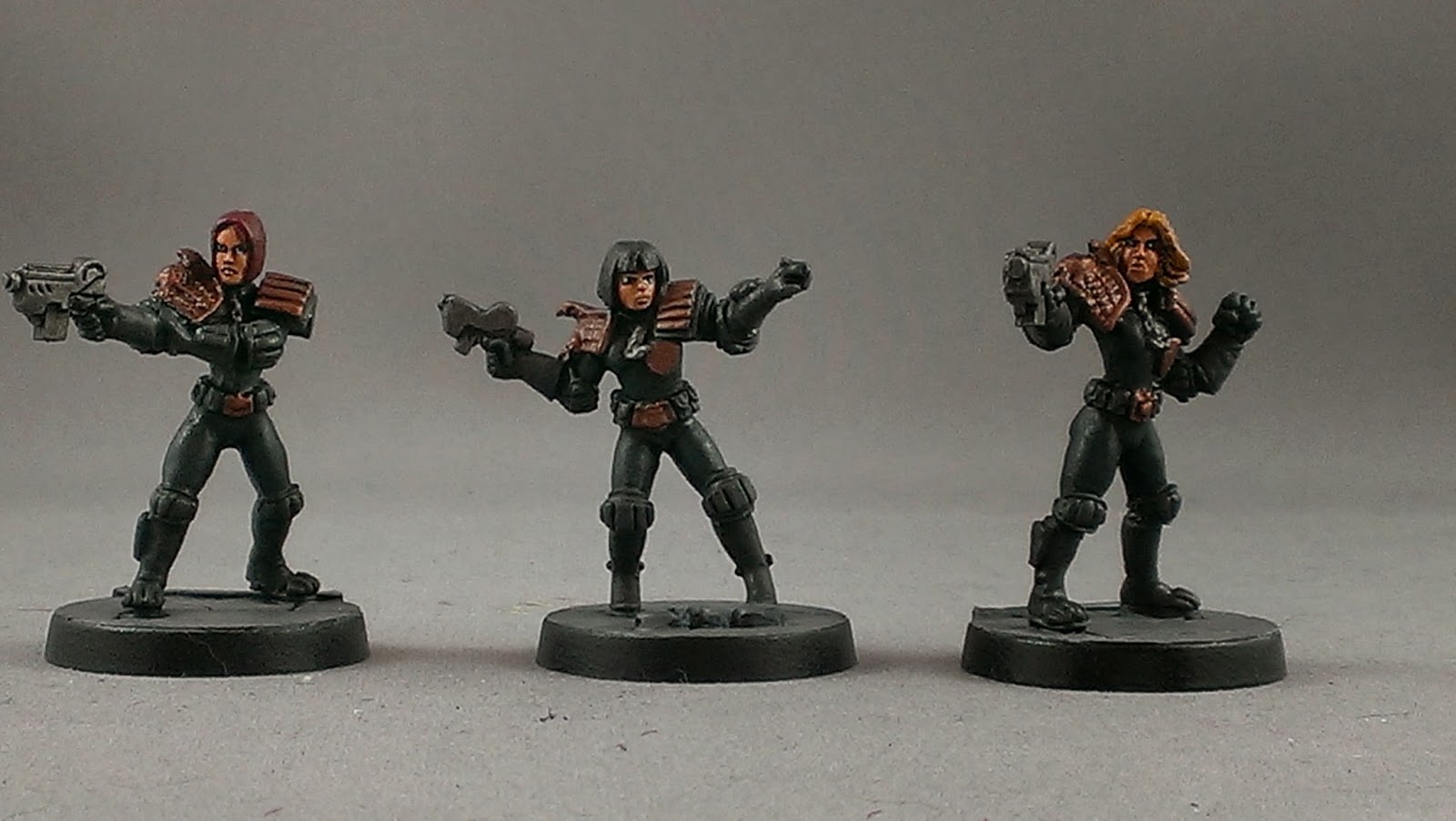 Judge Dekker is a relatively minor character in the Dredd mythos.  She did appear in multiple issues over a number of years so I found it really odd I don't have a single comic with her in it.  She basically fills the same role in the comics as Judge Giant being a Judge Dredd trained and then appeared later on in the series as a full Street Judge.  Unfortunately her career also ended the same way as Judge Giant.... 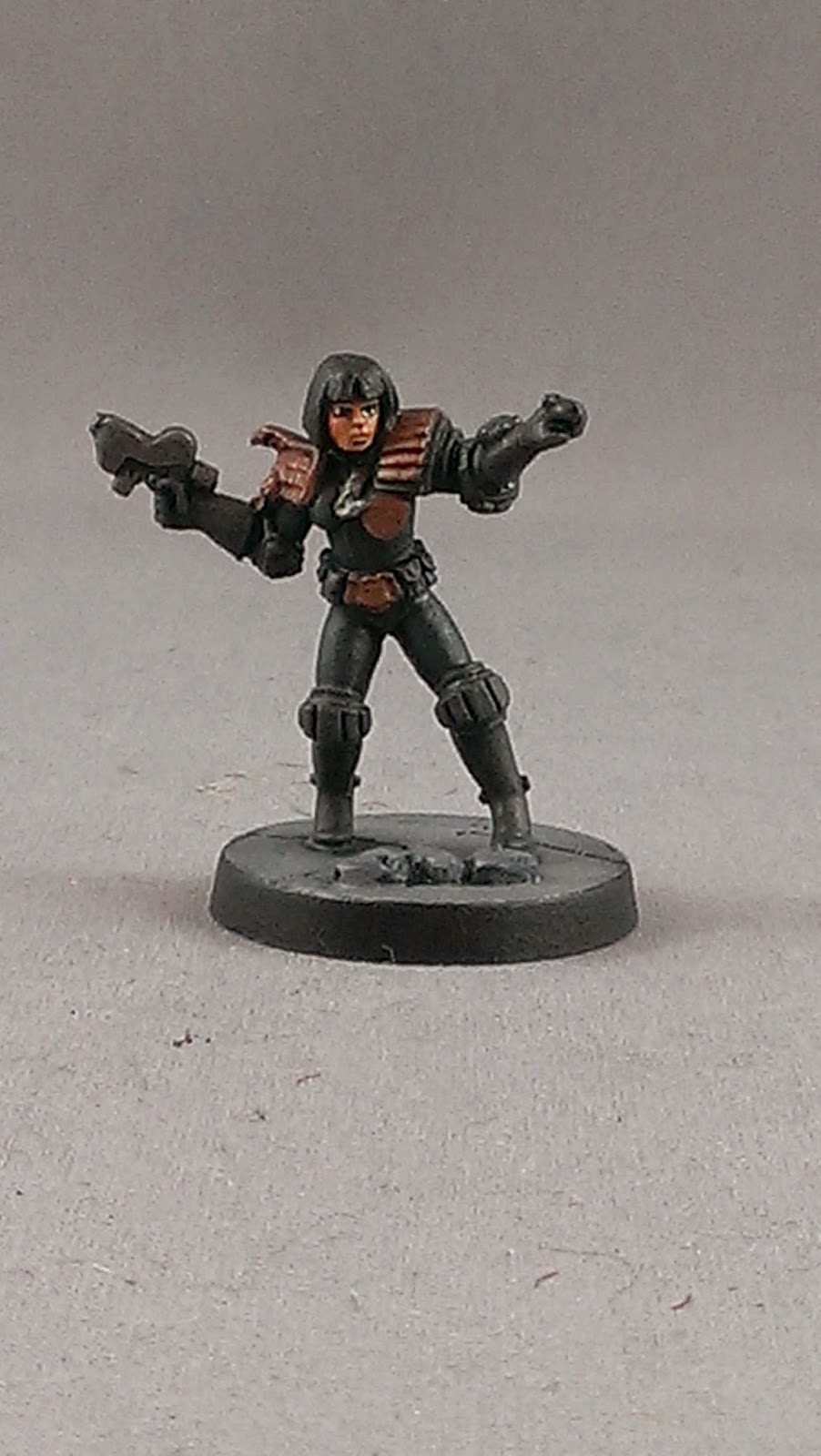 Galen DeMarco appears typically in the comics as a former Street Judge turned Private Investigator.  She's a neat character because she feels like the audience-eye-view of what's going on in Mega-City One.  She's a great miniature because outside of a Judge Dredd game she would make a great sci-fi heroine; cool uniform and armour, techie-looking gun, and looks like she's ready for action, not some pin-up girl. 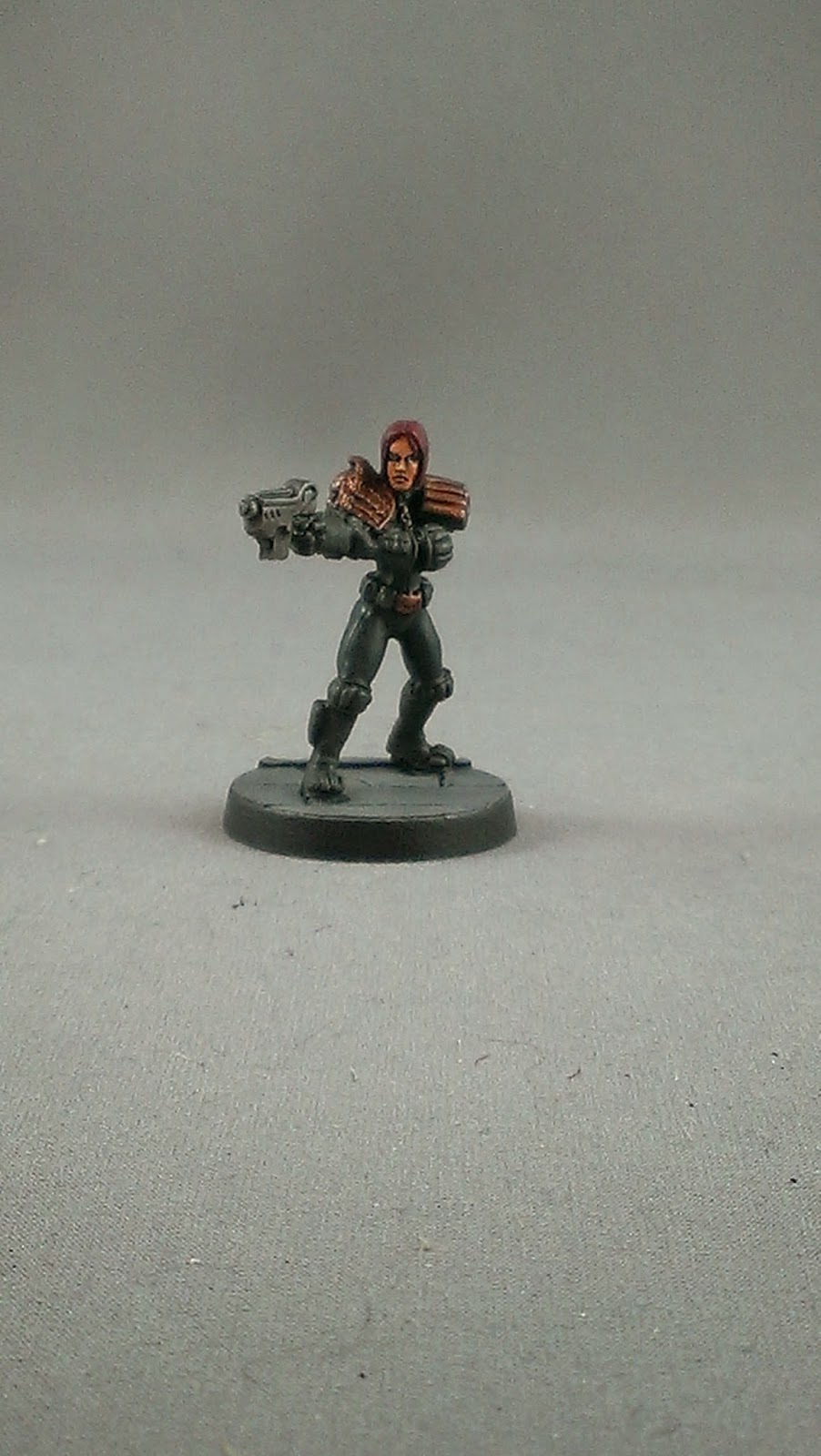 Judge Anderson is probably the best known of these three characters.  She's had her own lengthy series, appeared in a lot of big Dredd stories and appeared in the latest film adaption.  Unfortunately she's also probably the most poorly executed figure of the three.  Her face is blocky,  her hair is a bit over the top, she looks out of place compared the other two Judges. 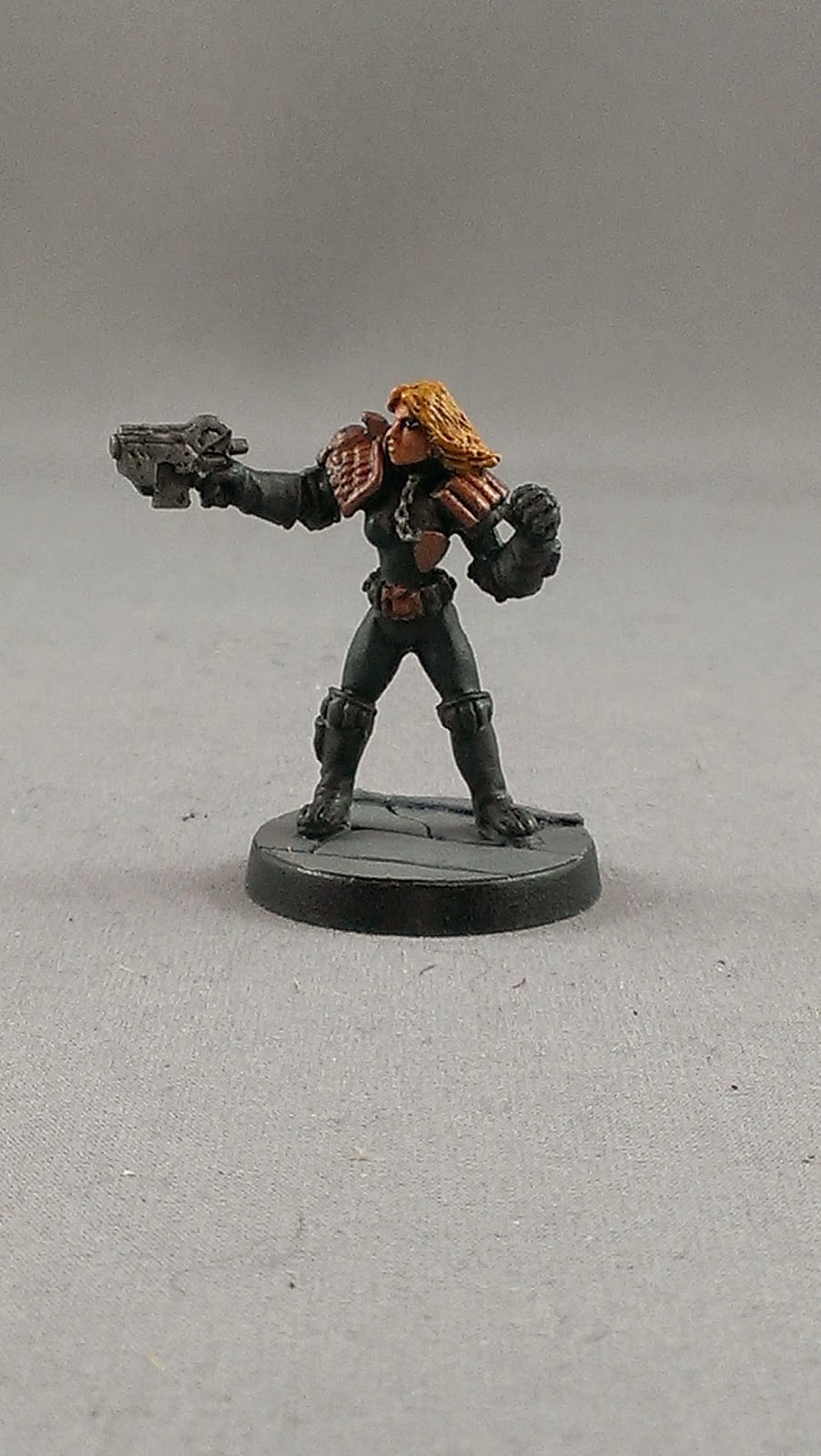 I've got a lot of odds and ends on my painting desk so next update might be a random fig or it might be back to the Blood Angels.

I think I might have broken one (or more) of my players' brains tonight... 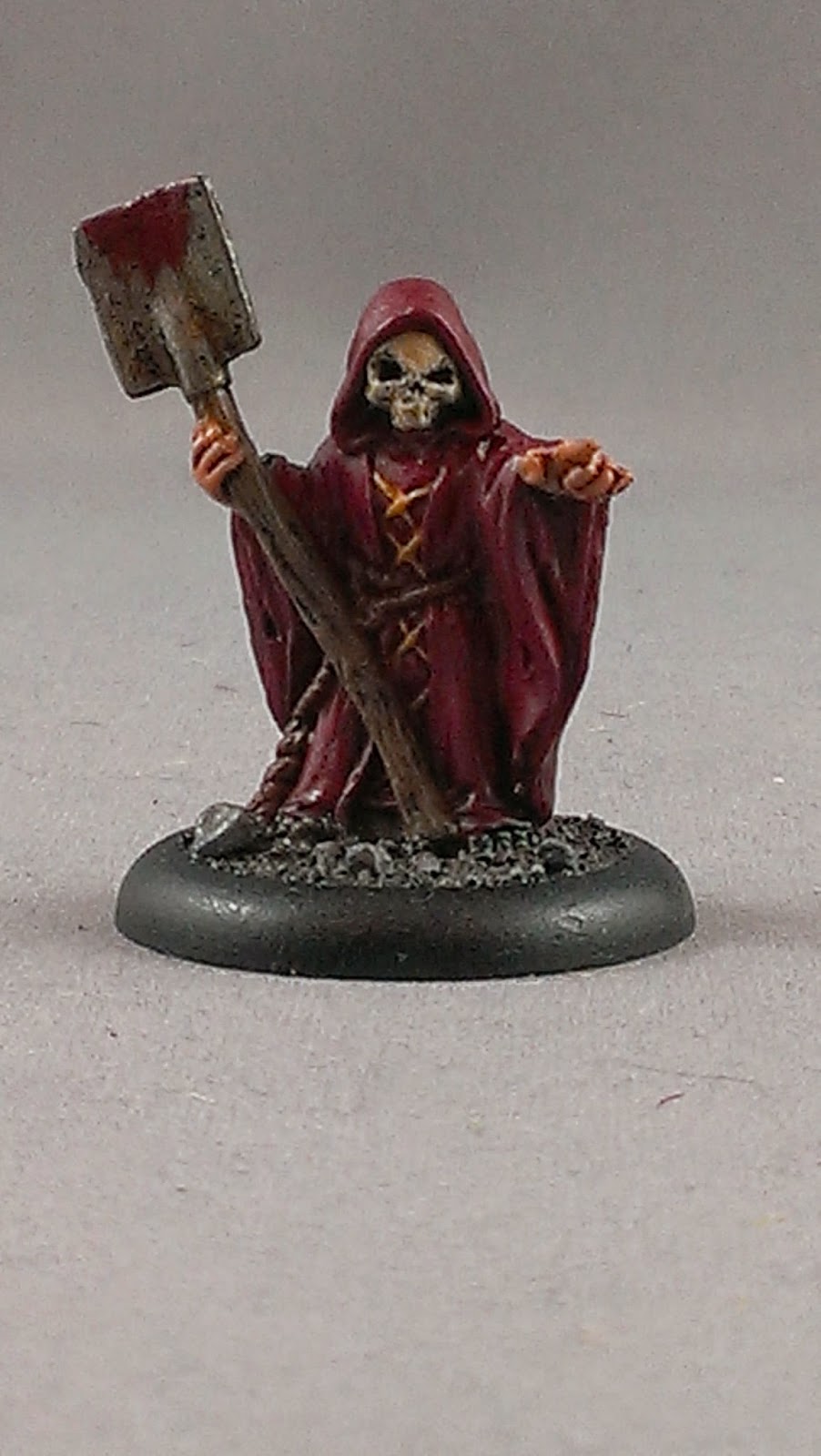 In addition he had some magical snow-globes that when hurled unleashed Ice Imps upon the party. 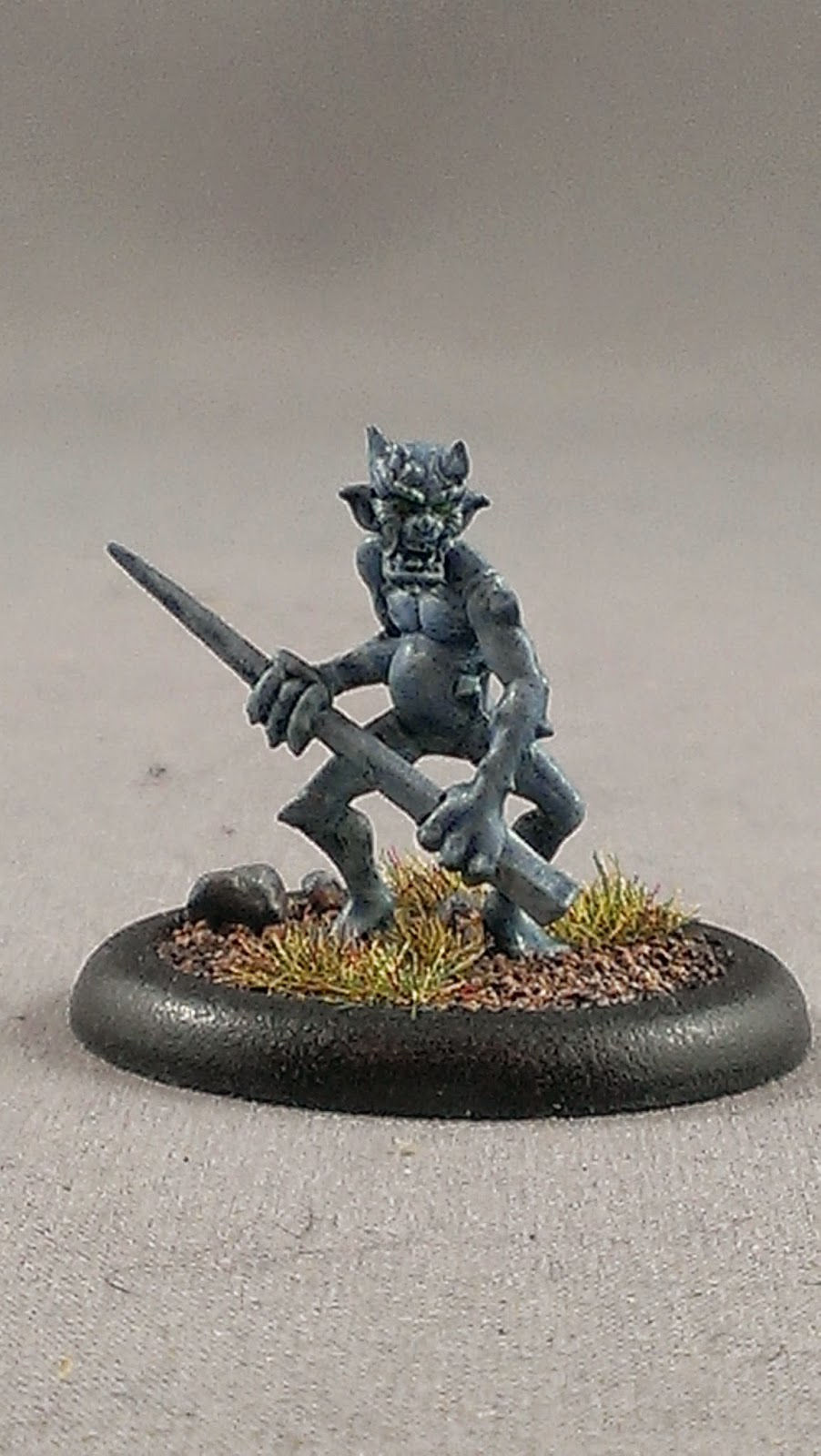 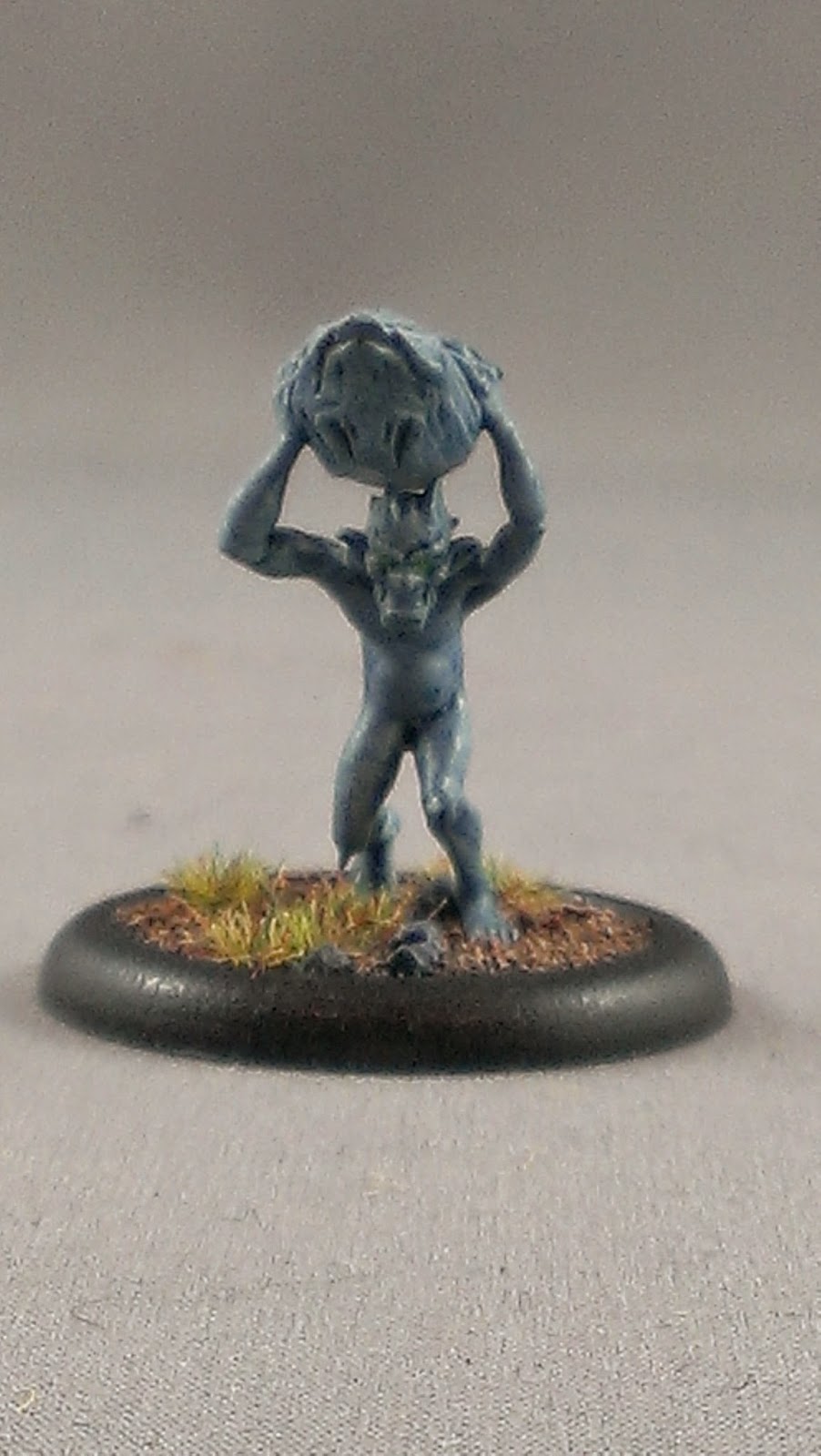 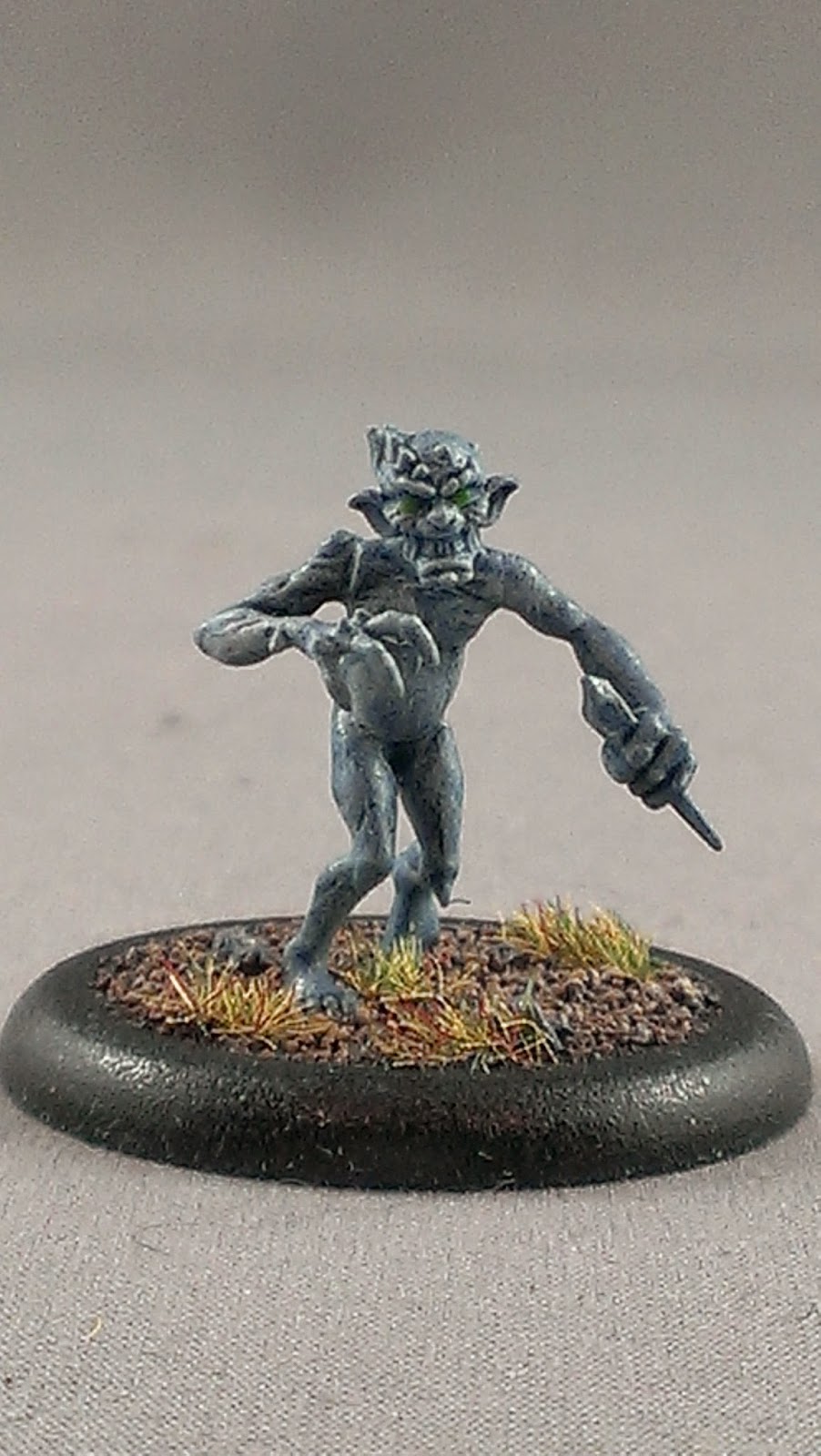 At the top of the mountain the party discovered a secret lab being attended to by Philos The Red, the NPC who's alleged death had kicked off the whole adventure in the first place. 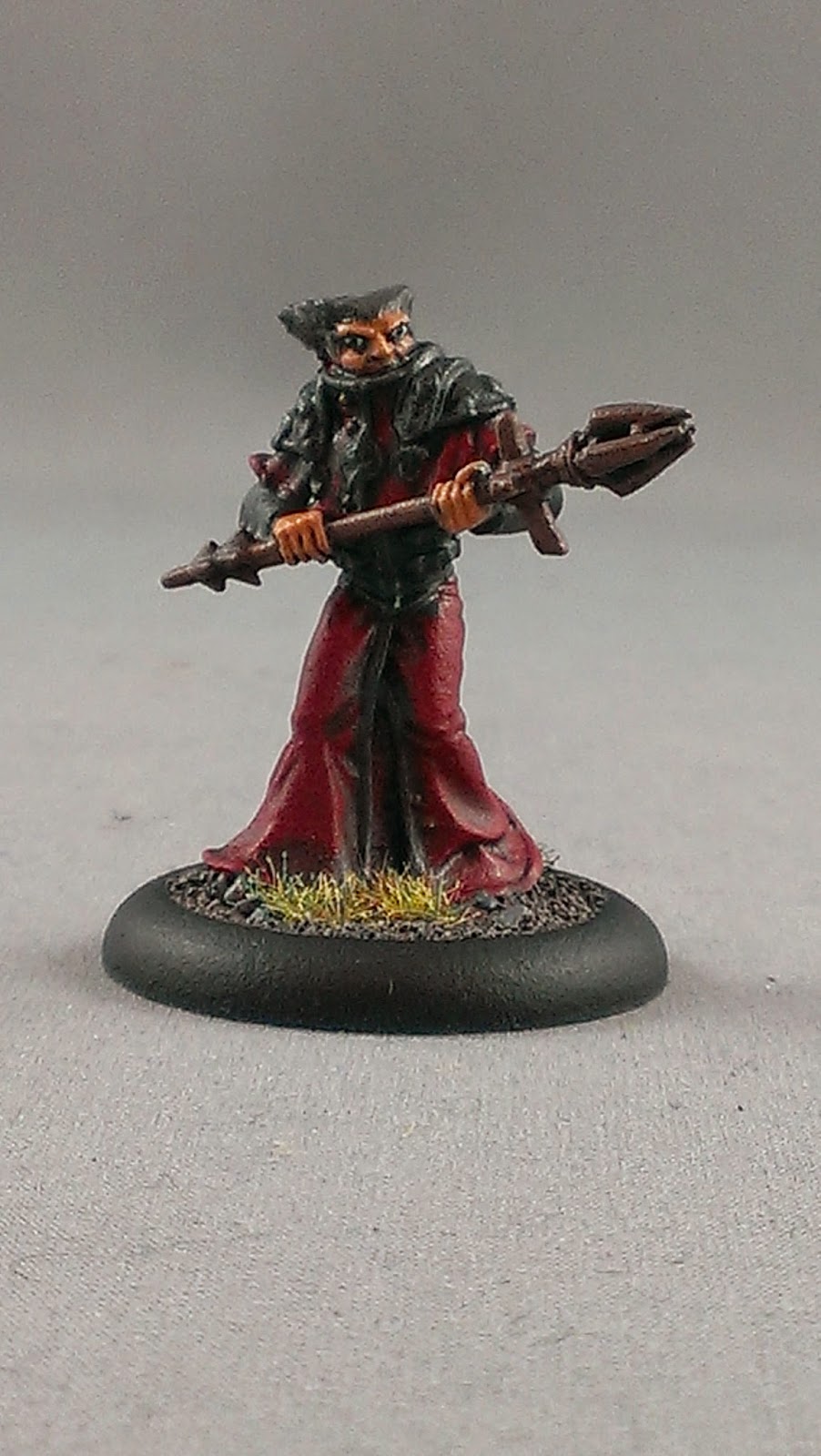 During an encounter with Philos and his Sentinel an equipment malfunction resulted in Philos' untimely (well-timed?) death. 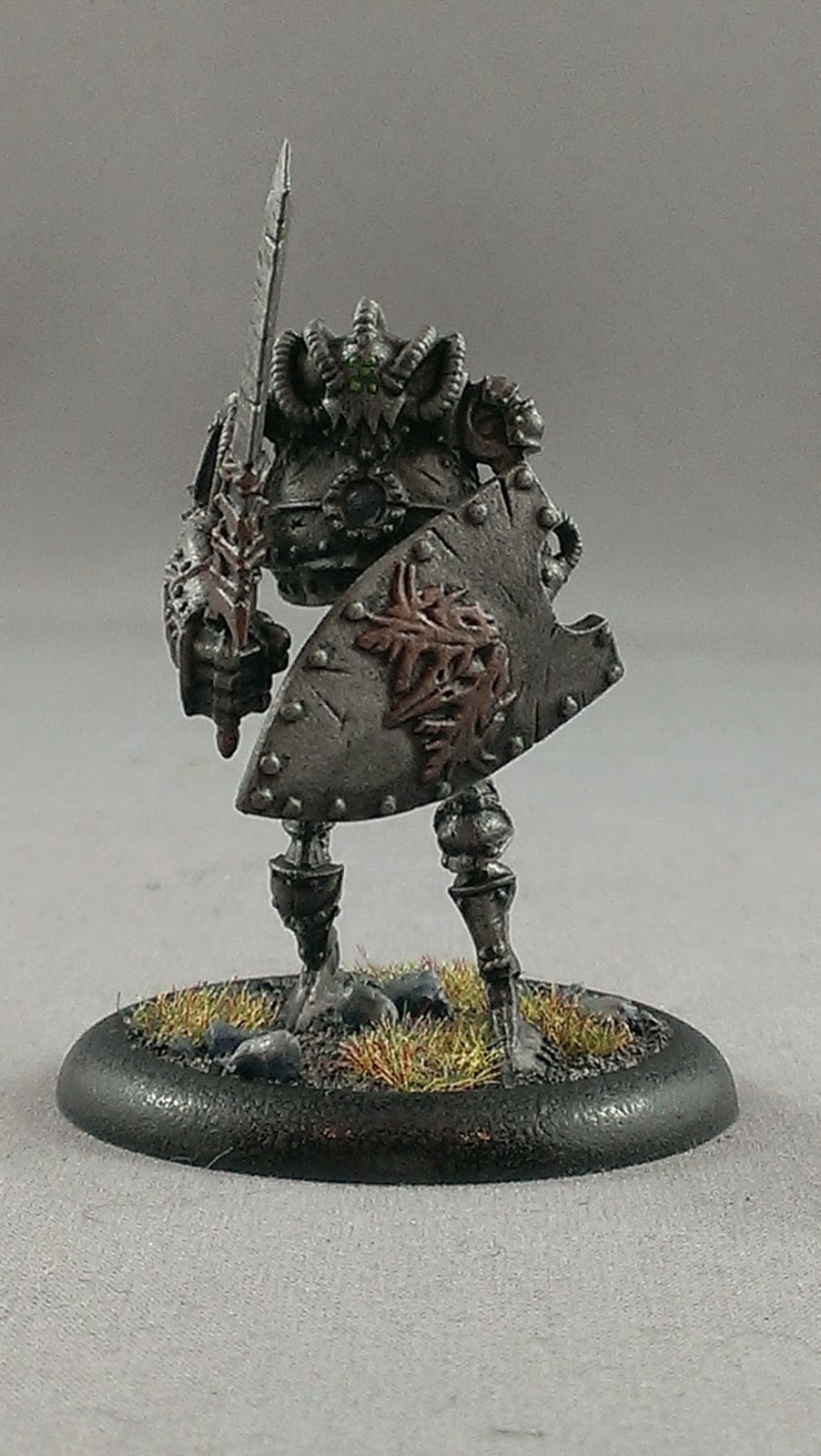 The party started back towards Thatchertown in some boats they discovered in a grotto behind Philos' lab but they decided to stop along the way back at the Hall-House to recover some materials they had left behind.  When they got there the house showed no signs they had ever been there, nor had any of the damage to the property or monster habitation ever occurred.  They returned up the mountain and discovered there was no sign of a lab either.

What is going on?  What will our heroes do next?

Because honestly, how cool is the name Robo-Harpoon-Cat?  I don't know for sure but it sounds way more interesting than "Hunter" to me. 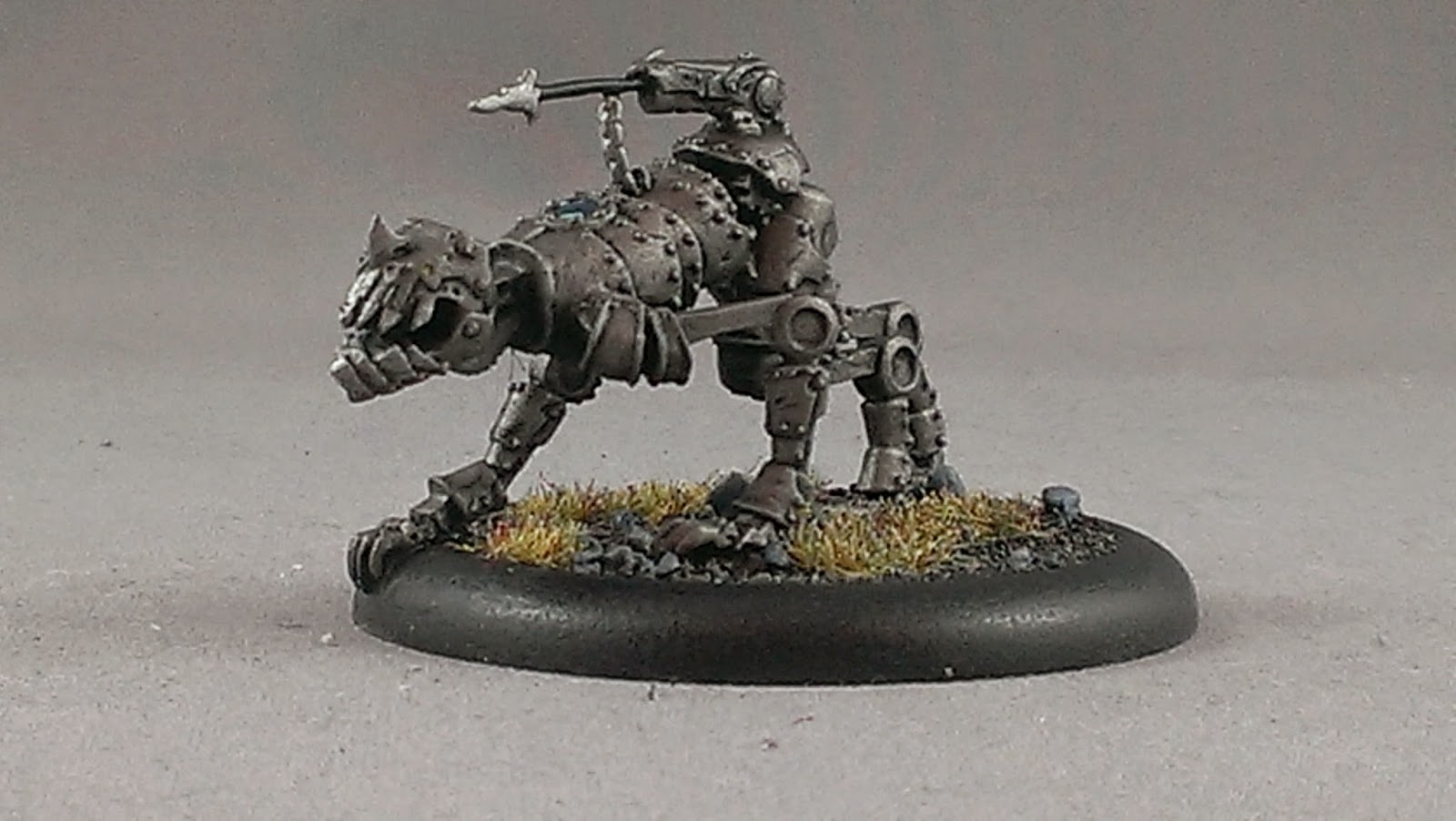 Robo-Harpoon-Cat is the last of the models I still had from the C. Hoffman crew box for Malifaux.  I wanted to get it done for sake of having all those models done if the option still ends up existing to field them in a Leviticus force, and if not I might need them if I end up GMing Through The Breach later this year.

Email ThisBlogThis!Share to TwitterShare to FacebookShare to Pinterest
Labels: Malifaux

I've gotten the chance to play a lot of Strange Aeons this past year and I've really been enjoying it.  The only place the game fell short for me was in my own pulp figure collection which is very slim and had an entirely desert-theme.  So after a full year of searching out the mysteries of the unknown in faraway lands our intrepid team of Threshold agents is ready to return home and continue their assignments in the new world.

The two figures here are meant to be new versions of Rick O'Connell and Nigel Bottomtooth, two of my existing team members.  Rick is now attired in his suit and ready for undercover work in cities and towns across North America, while Nigel has traded in his bolt-action rifle for a Tommy-gun and is ready to sweep the streets clean. 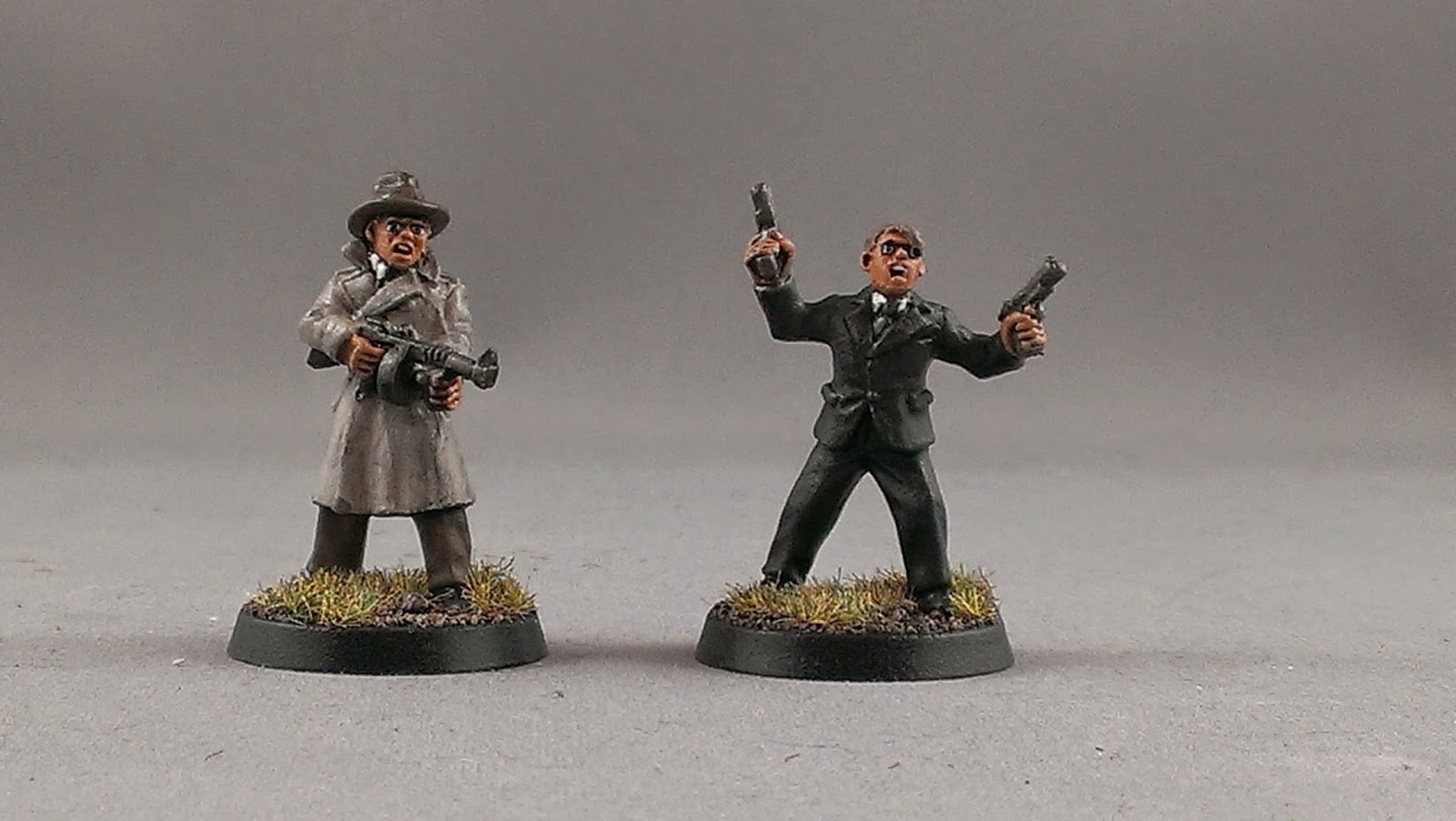 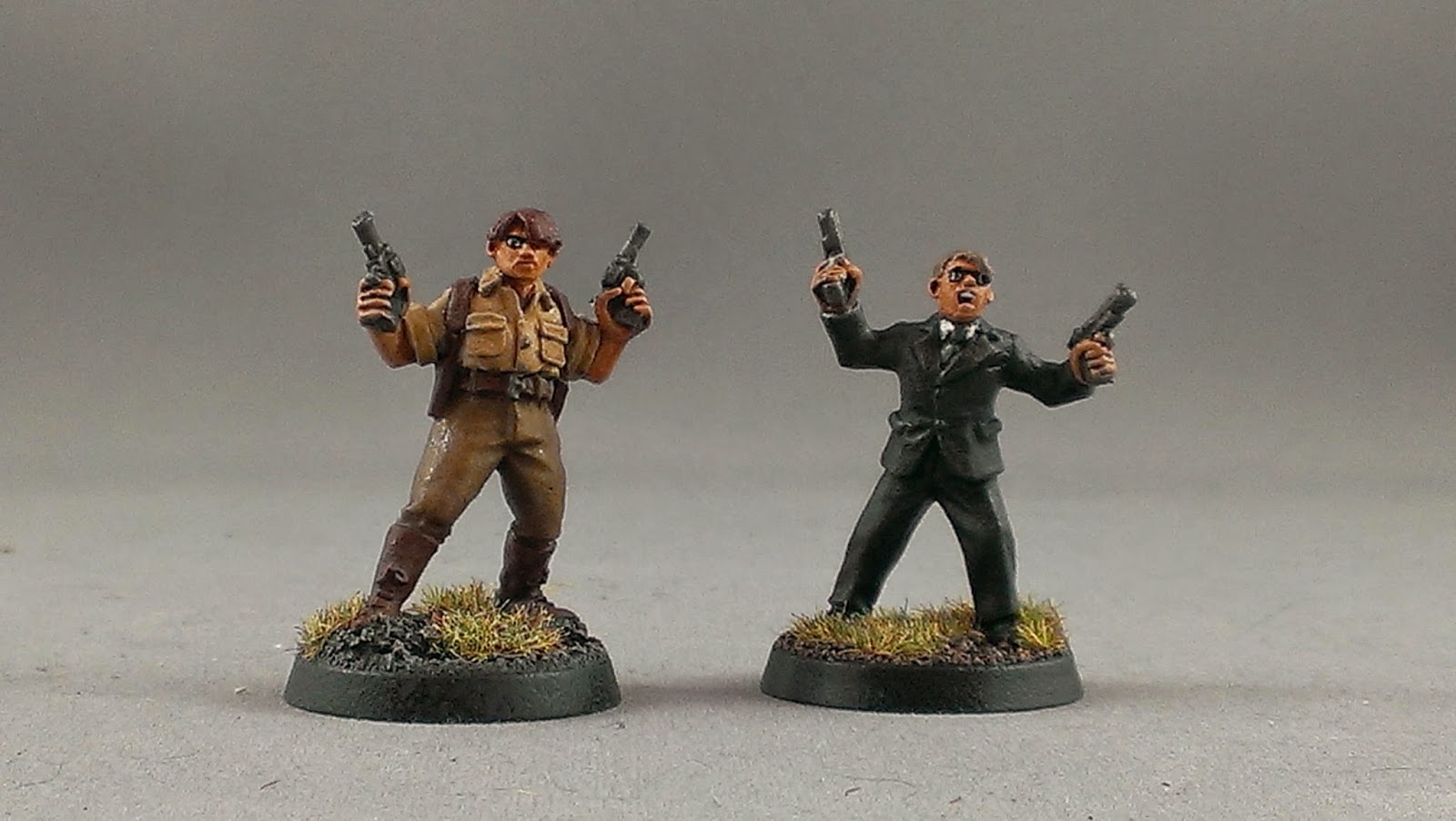 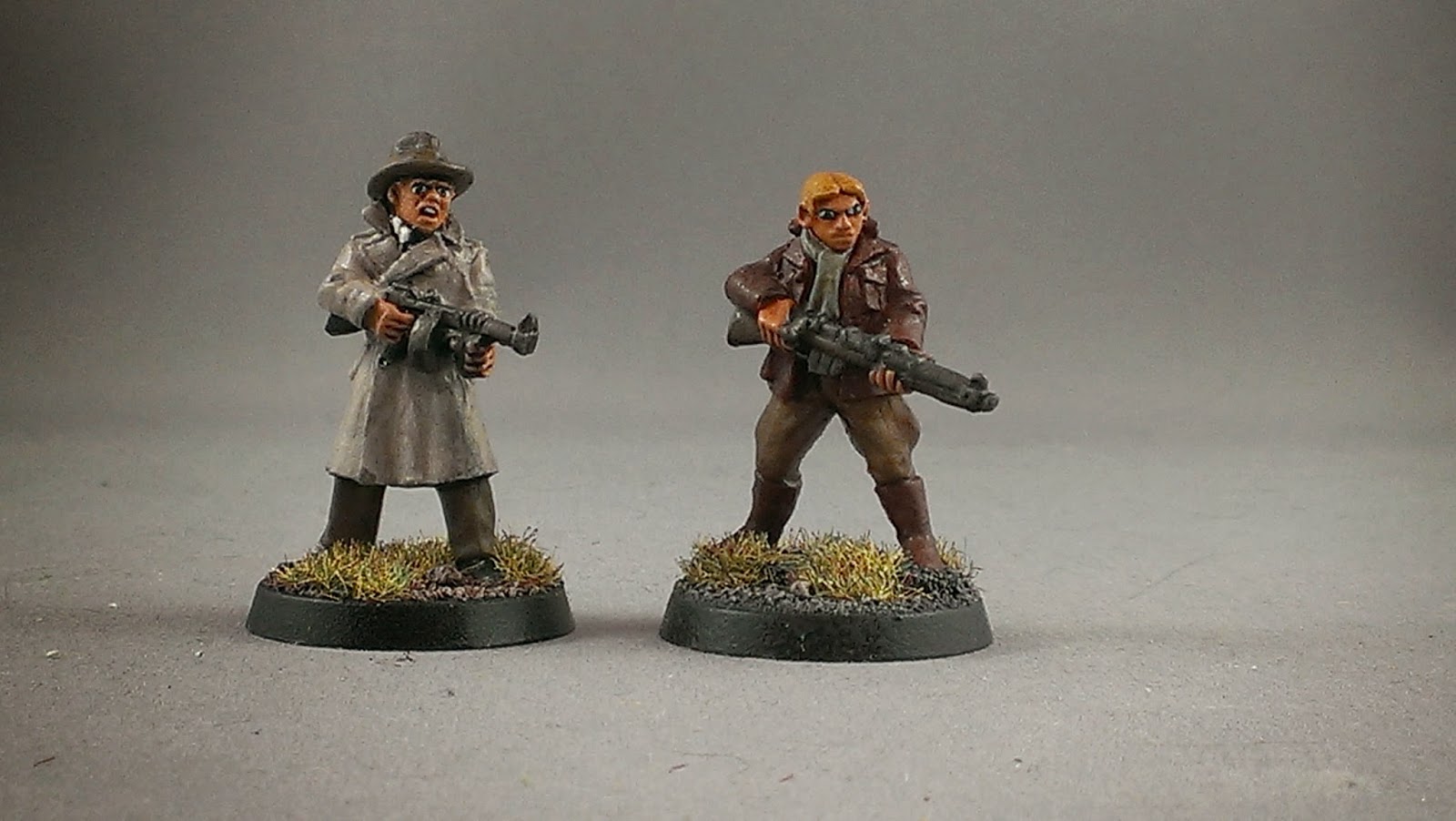 I'll be painting a few more period specific figures when time permits over the next couple of weeks.