Most of my experiences with DMsGuild to date have been with adventures and encounters, today I'll be going a slightly different route looking at a new and unique subclass of the Druid designed specifically for urban adventure. 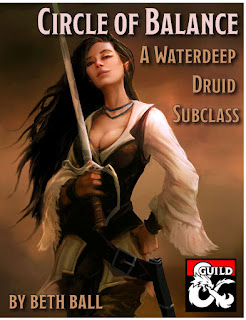 The Circle Of Balance is by author Beth Ball of Grove Guardian Press (the design team behind D&D Duets) and is a great example of the kind of content that can really add new content to a D&D 5e game.  In brief the core notion of The Circle Of Balance is that civilization is a part of nature, and as protectors and/or shepherds the city can and is part of a Druid's responsibilities.

The subclass itself seems extremely well balanced adding some martial strengths at lower levels, which make for a good trade off for some of a Druid's basic spells which may be of dubious use in a city.  In addition the Circle spells that have been added give the Druid some additional typically non-druidic utility powers that play off the people and materials that make up a typical urban environment in a fantasy world.  For any fans of the comic The Authority (or later runs of Stormwatch) this subclass and its Circle spells are a great starting point to make a character similar to Jack Hawksmoor (minus the suit and tie).  In addition to the mechanical additions that serve balancing a Druid in a new environment there are a number of features that really tie to the theme of operating in the packed terrain of the city.  "Wildly Compact" which allows more compact versions of Wild Shape animal forms to be adopted.

In addition to the subclass rules themselves the supplement also adds rules for 2 new creatures; The Fey Pug and The Jewel Fox as well as formatting The Fey Pug as a D&D Sidekick.  I know in my home game this has the potential to be right up my daughter's alley.

Overall Circle Of Balance is  a unique and worthwhile addition to the existing player options in D&D and is well balanced enough to drop into an existing campaign without upsetting the power balance of existing classes.

Circle Of Balance is currently available from DMsGuild at https://www.dmsguild.com/product/294719/Circle-of-Balance-druid-subclass?term=circle+of+bal for $1

I'm about to go on a string or painting monsters for some D&D games I'll be running over the next few months so I thought I'd take one last chance to show off a player character model before Christmas.

Full disclosure I didn't 'paint' this miniature.  This is one of the awesome Wardlings pre-painted models by WizKids, but I did touch it up and do some basing so here we are.

In my seemingly endless half-baked plans to get my daughter Zoe to play D&D I've gotten her to paint an assortment of miniatures but I've also picked out some cool looking models that I thought might appeal to her as a character.  This is one of those models.

The female rogue with badger is from the first release of Wardlings and in my opinion still holds up as one of the nicest models. 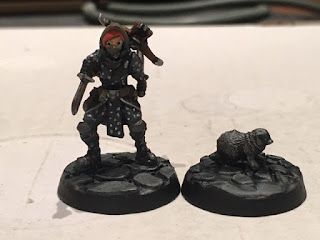 The studded leather armour, knives and crossbow are a great example of what I've referred to before about how I like the fact that the Wardlings models are children and pre-teens but they look like serious adventurers.  These are exactly the kind of miniatures 12 year old me would have been really excited about if they had existed when I first got into D&D back in the dark ages.

A book of animal companion rules was just released on DMsGuild so I'm also thinking this is going to be the perfect time to use these miniatures with my daughter to draw inspiration from the Spirit Animals series of books by Scholastic.  Having said all that I know a badger wouldn't be her first choice of 'cool' animal to go on an adventure with so I grabbed one of the animals more up her alley from another pack to partner with the rogue; a lynx. 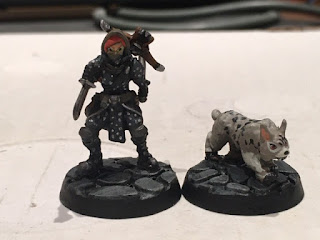 I also thought I'd snap a quick pick of the rogue standing next to an adult-sized model (Fergal from my last post) to highlight how well these models blend into existing fantasy figure lines. The Wardlings are smaller while very much remaining in scale with existing miniatures.

That's it for my for PC models for 2019 I think.  Time to dig out the Monster Manual and a notebook and start planning for the bad guys!