Yet more and different Pig-Men

In addition to a possible Wonderland themed D&D game I've also started prep on another more classic or 'regular' style fantasy game.  I've collected up a bunch of pig-faced-orcs by my friend Ash also recently hooked me up with some actual Pig-Men for the Relic Blade skirmish game.  These are absolutely fantastic figures and fit me current vibe of 'old-school but new'.

Pig-Man #1 is armed with a sword and shield.  I feel like unless another piggy miniature comes across my path I'm guessing this guy will be the chief/boss/bully for this encounter. 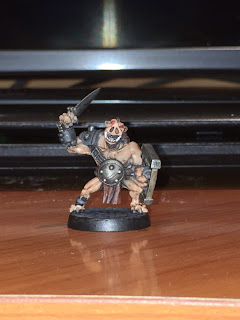 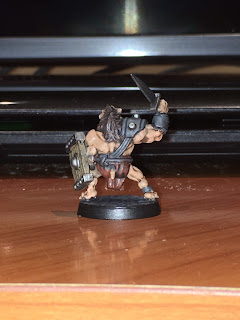 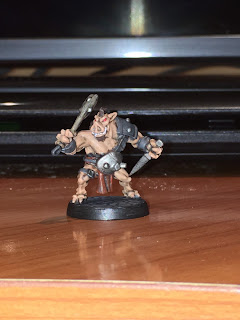 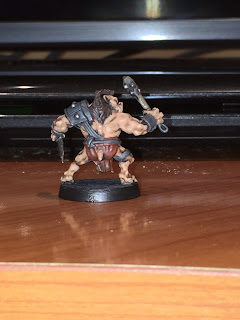 Pig-Man #3 is carry a mighty two-handed battle-axe.  In addition to his axe he has a really well-textured belly plate. 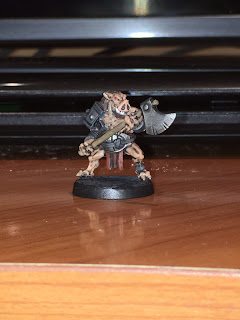 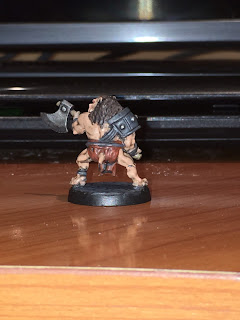 I'm not quite sure how pig-men became my thing but looking at two other projects on my desk, apparently they are in fact my thing.

Following on my last post as an add-on to my Broken Contract game I did get a few of the Ash Walker figures. 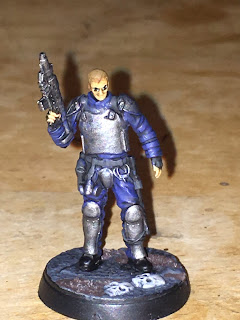 This is a great figure on multiple levels.  First up the sculpting is great with some great depth and texture.  The gear is not only suitable for Broken Contract but potentially many other near future games as well (he'll be the latest addition to my Peacekeepers for This Is Not A Test).  And he comes with multiple arms and heads so he can be assembled in various configurations.  In addition to the 'basic' model I assembled one with the riot helmet and taser-rifle. 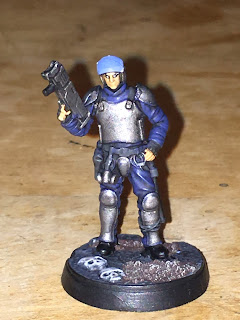 A funny thought occurred to me while taking pictures tonight.  My friend Darren asked me a few posts ago to start including pictures of the backs of some of my miniatures.  For the most part I've never thought that was really necessary but this time out I'm including one.  For some reason the only scene that really sticks with me from Iron Man 3 is when Tony Stark is tied to a bed frame in a basement/dungeon and while insulting his captors he refers to one of them as "Pony-tail-express".  Painted my Ash Walker figure and it all came flooding back.... 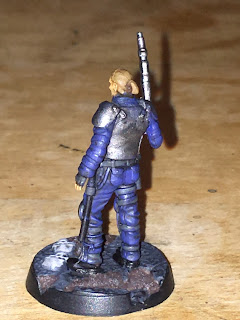 Email ThisBlogThis!Share to TwitterShare to FacebookShare to Pinterest
Labels: Broken Contract, This Is Not A Test

A while back I was posting some content for a miniature line by Breaker Press for their proposed future game Broken Contract.  That game then went to Kickstarter where it was successfully funded and has just recently shipped out.  I received my copy this weekend and decided to play a little show and tell.

First up Broken Contract is set in a dystopian future where a significant portion of humanity lives under "contract" (read as; legal slavery) to a number of mega-corporations using them in the most cost-effective manner possible.  The game universe is really well realised through it's art and fiction that has previously been shared through documents on Breaker Press' Facebook page and web store.  To give you a taste here are the front and back of the box my game rules and supplemental components shipped in: 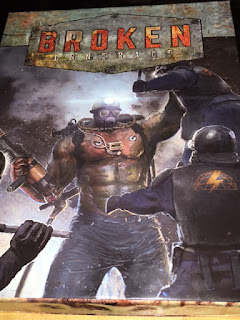 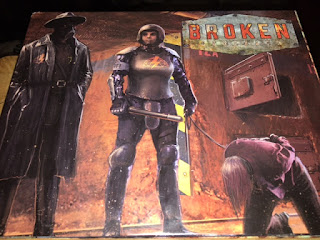 In the basic scenarios for Broken Contract the miners (or Breakers) are basically trying to escape their life of enslavement to the FerrumSky corporation and obtain their freedom.  FerrumSky has employed the private security company Black Squadron Security to keep the miners in check.
The game mechanics themselves are very straightforward but allow for a variety of tactical choices once you start playing.  Attacks are actively resisted so you may choose to attack a specific way based on either your own strengths or your perception of your enemies weaknesses.

The rulebook is attractive and really well laid out.  Personally I really like some of the choices in the design of the book as it makes it feel like a real document in a lived in world somewhat reminiscent of some of the older better quality Top Secret modules. 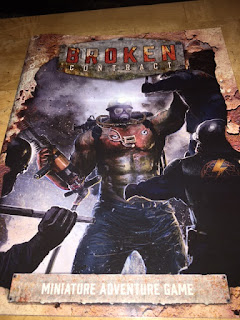 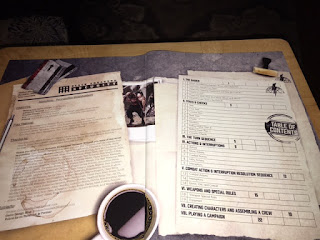 Lastly on the component-side Broken Contract also shares some conventions with some of the current design of popular miniatures-based board games.  Each character has a dashboard that can be loaded with cards representing various equipment and abilities which is handy because during play some gear can be stolen or handed off. 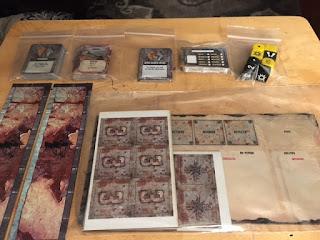 If you're an old-timey gamer like me the game also includes roster sheets for recording your warband in the more 'traditional' style.

From a game-play point of view the game hits a similar sweet-spot for me that This Is Not A Test hit.  The core mechanics are actually extremely straight forward and simple but some of the options for different attacks and defence as well as scenario specific objectives make the game very fluid without actually becoming overly complicated.

If you like small scale miniature skirmish games that add-in some RPG and board-game elements Broken Contract is well worth it.  And it should be noted that even though they are a separate purchase from the game itself the miniature line that accompanies the game is full of terrific sci-fi figures that somehow manage to feel unique and familiar at the same time.  I highly recommend this game!

Following the 5th season of the Dungeon Crawl Classics game I'm playing in it was definitely time for an update to my character model.

Jaqar started out as a Thief on the mean streets of Vornheim cutting purses and generally living the hard scrabble life of a downtrodden medieval peasant but after joining with a group of adventurers found himself magically transported to the distant Purple Planet where he fought an assortment of weird aliens and alien/human hybrids.

Our last season ended with the group finding a spaceship that due to a few lucky rolls and the addition of a skull-mask/cap Jaqar was able to figure out how to pilot.  As part of their change in scenery and circumstance the group adopted the uniforms of the former ship crew which were basically colour-coded boiler suits.  Jaqar took to wear an orange uniform but after some reflection on my part I realised he's been too consistently squishy to stop wearing his armour so he's thrown his studded leather on over top of his crew uniform (and added a shield) for the group's new journey to the stars. 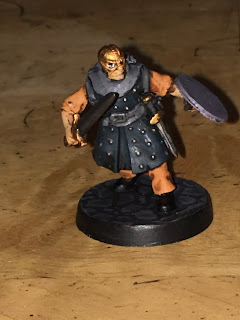 Jaqar is made up of a bunch of different plastic components.  I started with the same bretonian body as the original model to represent his armour.  He's got the head from a Frostgrave Cultist so I could get a neat looking helm/mask, and a Frostgrave soldier sprue provided his new shield.  For his arms and legs I cut them off a Heroclix Arkham Inmate model.  To finish off he has a sword from the bretonian men-at-arms sprue and a backpack from the Warlord British Infantry for Bolt Action.  A lot of chopping and swapping....

And here's the original for comparison. 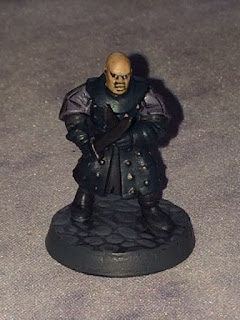 Overall I'm pretty happy with how he turned out.