Once again the tiny tiny decals represent my last hurdle

I (mostly) finished my next 2 mechs the other day, the anti-air Defender for Robotech and Rifleman for Battletech. 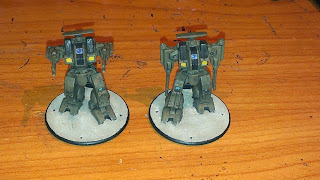 I'm hoping to get the tiny decals done before I go back to work on Monday.

Today's update was driven by 2 things.  First up as I mentioned previously I want to get all the Ressurectionist stuff I've already got for Malifaux done before the Molly box set comes out (which now sounds like 8-9 days from now), secondly the theme of the next round of Wyrd's Iron Painter is "Something Wicked This Way Comes" and the Valedictorian seemed like the perfect fit. 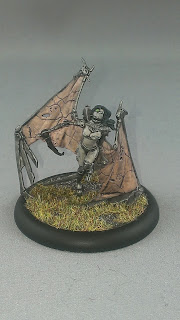 The Valedictorian is one of the iron zombies from the University Of Transmortis set for Malifaux.  She is a henchman which means she can lead small warbands herself without a master.

I'm also now planning to paint a second iron zombie for another painting contest, I just have to decide which one.

I'm super stoked about having her done and getting to use her in some games!

Email ThisBlogThis!Share to TwitterShare to FacebookShare to Pinterest
Labels: Malifaux, Through The Breach

Another quick side-step through the breach!  I have 3 more projects for my Ressurectionist for Malifaux on my desk and I'd like to get them all done before the Molly box set comes out.

Project number one is the smallest (by model count anyway), and was already half-way done; the newest plastic Flesh Golem. 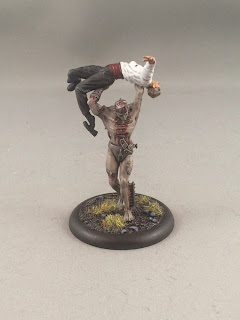 To be honest I had really mixed feelings about this figure.  On one hand it's an excellent sculpt, with great detail and in spite of being a lumbering monster really captures a sense of energy and movement.  On the other hand other than the pose and the 'victim' it's identical to the previous model, so I feel using the two side-by-side will be overly uniform.

Next up for Malifaux will be the Rotten Belles and University Of Transmortis set and then I'm all caught up!

But having said that; tomorrow.....ROBOTECH!

Email ThisBlogThis!Share to TwitterShare to FacebookShare to Pinterest
Labels: Malifaux, Through The Breach

I finished up my Model A tonight, I'm pretty happy with how it turned out. 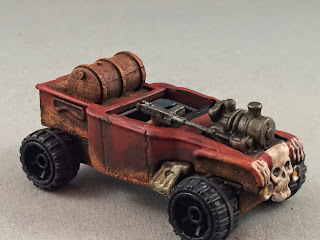 I feel like this is the first vehicle I've painted that straddles the line well between the down and dirty style of Mad Max and the near future clean and mean look of Car Wars.

I've got some Malifaux and Robotech to get done in the next day or two but after that I should be circling back for more carmageddon.

With the imminent release of Mad Max: Fury Road myself and many of my hobbyist friends across North America seem to be frantically chopping and swapping car parts to come up with models for some cool car games.

I want to preface this post by saying that although I have been enjoying this genre for more years than I should probably admit I got motivated to drag everything back out by my friend Dave Taylor's post on his awesome blog.  So thanks Dave for re-stoking the fire!
http://davetaylorminiatures.blogspot.ca/2015/05/vroom-vroom-cracking-open-car-wars.html

So without further ado I decided to haul out what's in the motor-pool so far and then decide on a new project from there.

I started off vehicle combat gaming with Car Wars by Steve Jackson Games which is still to this day my favourite system for this particular type of mayhem.  Having said that my first foray into gaming the genre with models came courtesy of Games Workshop and their under appreciated Dark Future game.  years ago I lost all my Dark Future stuff in a move but a couple of years back my friend Andrew generously gave me 2 of his Sanctioned Ops Interceptors to paint.  These vehicles were the result. 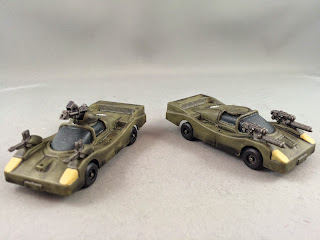 I've got to say I still really like the Dark Future models and I would desperately like to get my hands on another box set if I can ever find one!

Next up I started a collection of gangers from the Aberrant Games Warlands line.  To be completely honest I've never played the game but I've used their models for an assortment of other vehicle combat games.  What's also handy is that they offer an accessory pack you can use to modify existing vehicle models you have (like Hot Wheels or Matchbox) to arm and armour them. 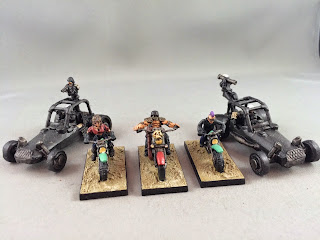 I felt the buggies in particular really captured the feel of the second and third Mad Max movies.

It wouldn't feel like Mad Max if the Main Force Patrol wasn't represented so here are my three MFP Interceptors. 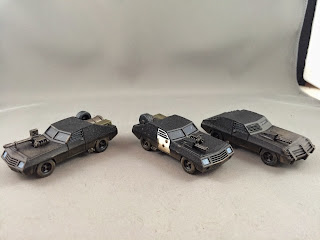 If I needed to bolster the bad guys I'm sure one of these could be "borrowed" by The Nightrider.

And finally from my pool of existing models my collection would feel woefully incomplete if it didn't included Mad himself and his dog (I believe named Dog). 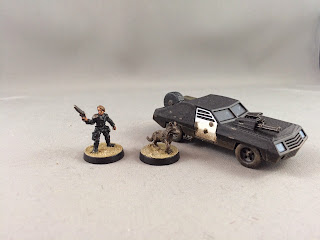 Onward to the future!  Although I've certainly got an adequate amount of vehicles to game with I don't feel like I'm participating unless I paint something new.  I decided to go off-book (for my anyway) and rather than build and paint a gaming model I've gone with a modified Hot Wheels car.

Basically I started off with a Ford Model A and removed the roof and windscreen.  I added off-road tires from a different Hot Wheels buggy and then bolted on a supplemental fuel tank from the Warlands accessory pack I referenced earlier and an extra machine gun I had from a Flames Of War tank. 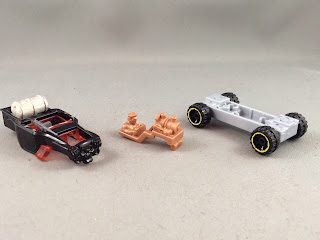 I'll be priming this before I leave for work today and then if everything goes to plan I'll paint and assemble when I get home tonight!

The long dark night of the tiny decal has come to an end, temporarily anyway. 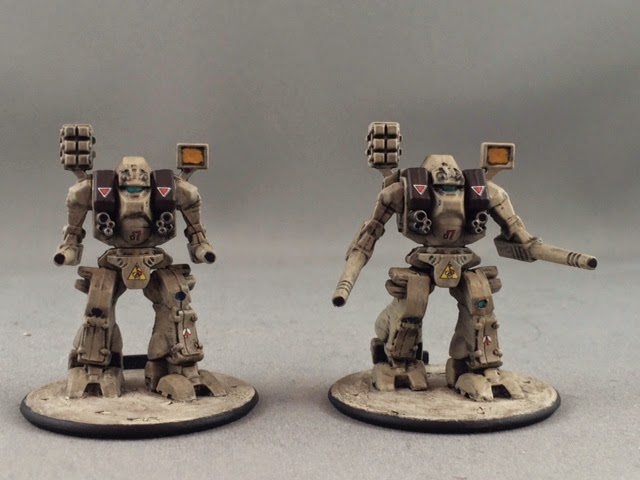 It feels great to get my first 2 models for this game done, that always seems to start some momentum.  And I'm really looking forward to painting my first Valkyrie.

Made a lot of movement on projects today...can't say I got a lot done.

First up my Tomahawks/Warhammers for Robotech/Battletech are all done except for the decals...the tiny, tiny decals. 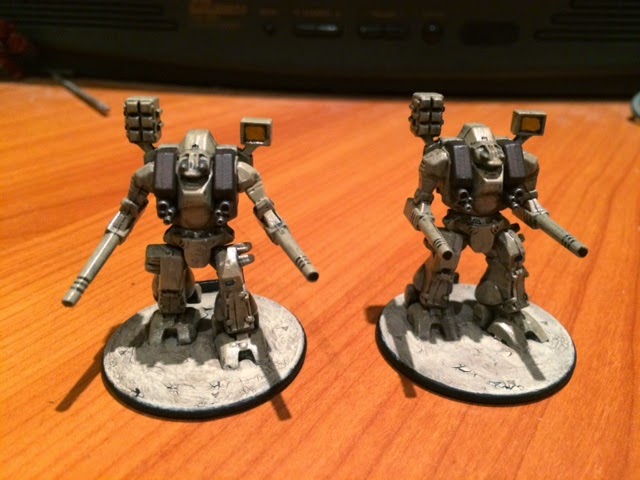 In anticipation of the day I'm not terrified of tiny decals I also built my next mecha project.  The VF-1J Veritech that will be piloted by Rick Hunter.  I decided to start off with the Veritechs that I got in the box game representing Vermillion Team, so I will be painting a VF-1J for Rick Hunter, 2 VF-1As for Max Sterling and Ben Dixon and then 2 generic VF-1A 'Brownies'.  When I get my next box of Veritechs I'll add Skull 1 and a VF-1A for Miriya...but that feels a long way away. 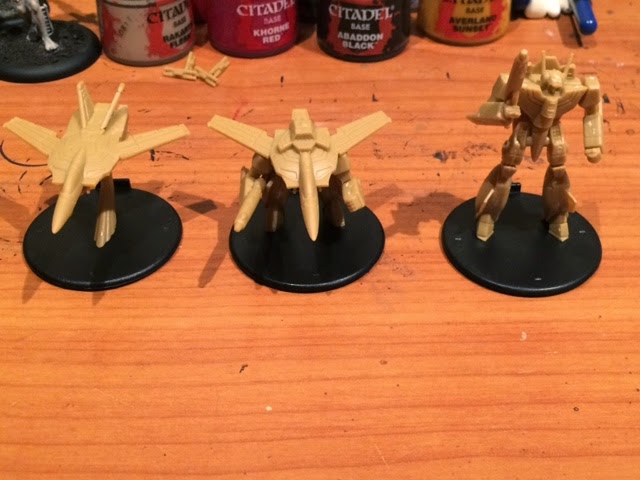 After my last game of Malifaux where my Flesh Construct was a total rock-star I decided I needed a second one to add before my next game.  So hopefully this guy will be done in time for making some bad things happen. 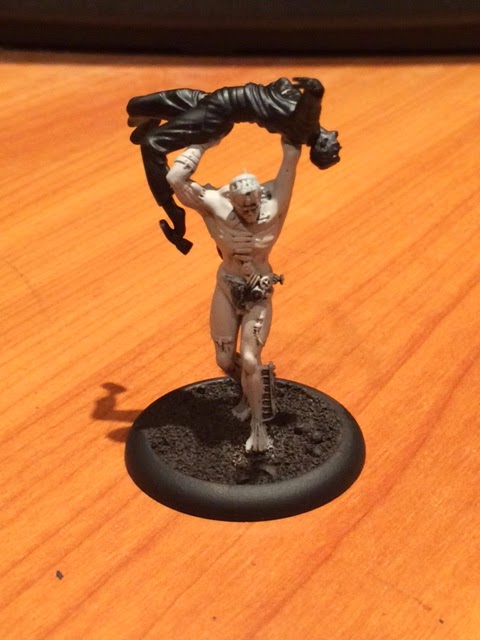 Email ThisBlogThis!Share to TwitterShare to FacebookShare to Pinterest
Labels: Battletech, Malifaux, Robotech, Through The Breach

During my lunch break today I managed to crank out Lorrie and Carl Grimes to join Rick on his post-apocalyptic adventures! 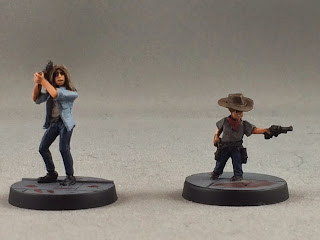 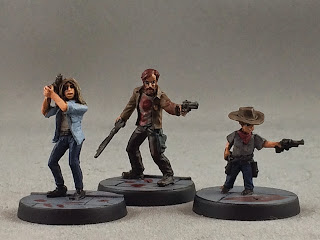 I honestly didn't spend too much time on these but went with a less-is-more approach.

Tomorrow should be a real hobby day so if I can find some primer I should have some exciting stuff going on!

I stayed up last night until about 2am finishing my entry for round 2 of the Iron Painter.  But I've got to be honest, when I got up this morning and discovered the deadline was NEXT Sunday I kind of wished I had gone to bed earlier.....

The theme for Round 2 of the Iron Painter is 'The End Of The World As We Know It'.  I didn't have a Michael Stipe miniature so I decided to go for something post apocalyptic.  I've had Mad Max on the brain for a few weeks but I didn't have any unpainted Mad Max miniatures so I went back the zombie apocalypse once more.  It was a bit weird for me to dig through my zombies and zombie survivor miniatures looking for one I wanted to paint because when I started this blog three-ish years ago it seemed like that was my bread and butter but I haven't painted anything along those lines in quite a while.

I settled on Rick Grimes from The Walking Dead (comic, not movie). 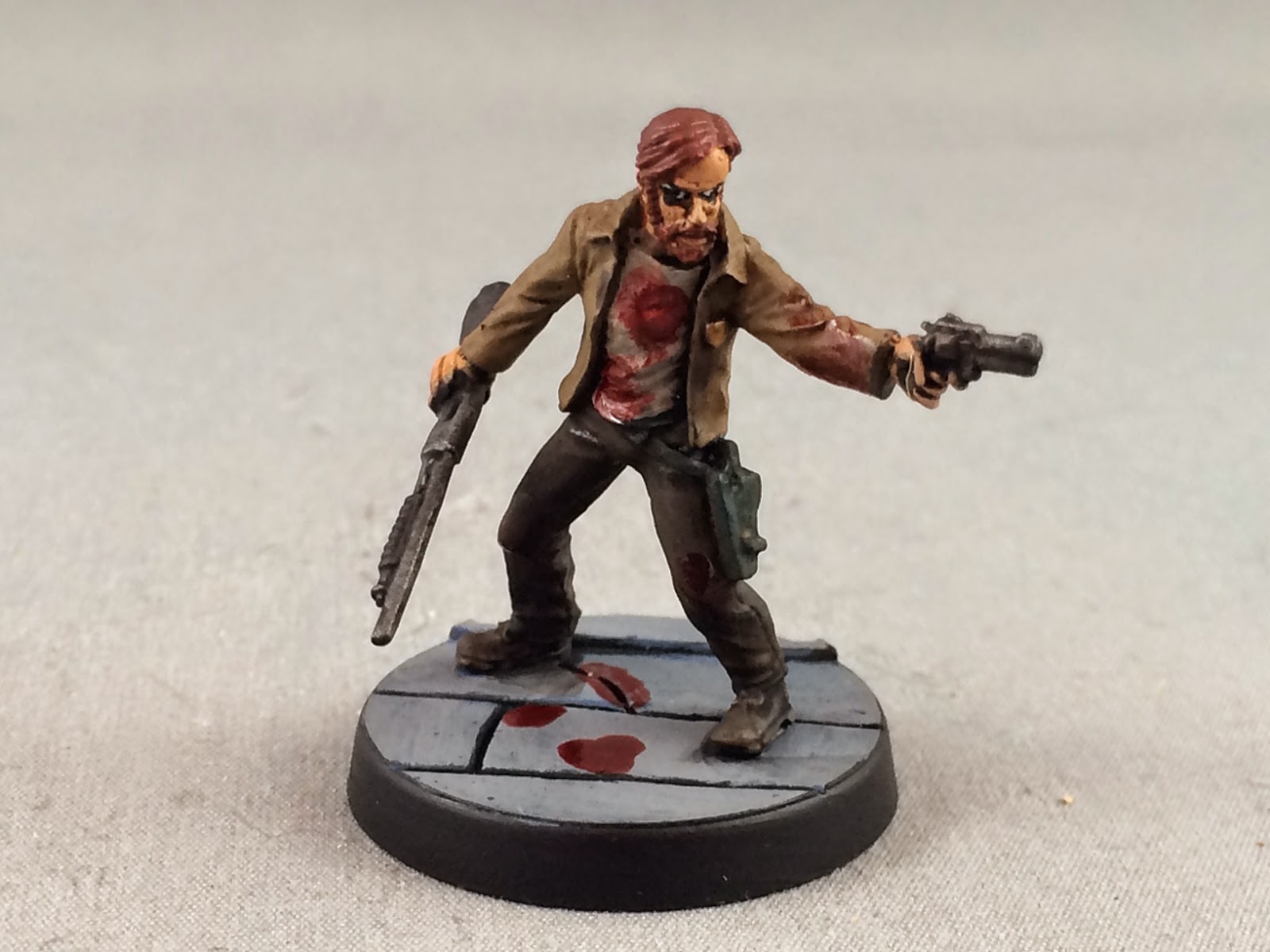 Rick is from a Studio Miniatures pack called "The Family" which also includes Carl and Lorrie, who I will probably paint this week just to have them done as well.  When I started the blog I had stuff from Studio Miniatures up here regularly and circling back to them it was really easy to remember what I liked so much about them.  They do great versions of action and horror movie heroes and have some fantastic themed zombie sets.

That's it for today but the protoculture factory has been hard at work churning out mecha so expect a run on those soon.